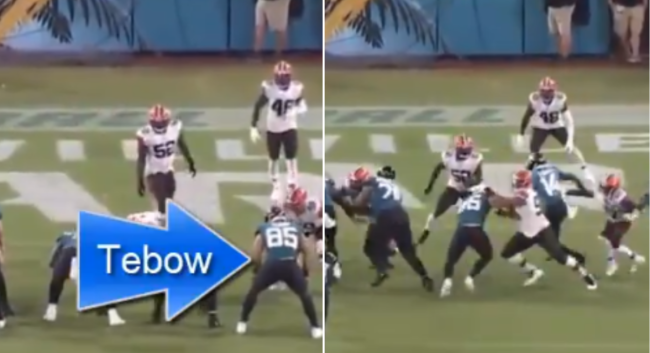 On Saturday night, the former QB made his NFL debut at tight end for the Jaguars at 34-year-old.

Unfortunately for Tebow, he went viral for all the wrong reasons during the game.

In one video Tebow was seen whiffing on a block but somehow still prevented the defender from making the tackle.

In a second video posted on Sunday, Tebow (#85) gets absolutely manhandled at the line of scrimmage while trying to make a block and the defender easily gets to the backfield to disrupt the play.

Honestly, the Tebow block that went viral wasn't even his worst block of the night. This was *the very next play* pic.twitter.com/tINWyJpWSE

It’s like a Tight End that has never blocked anyone in his career has been exposed to not being a tight end at all and is a PR stunt https://t.co/Db62C3Obmo

I didn’t think it could get much worse but apparently it does https://t.co/eecPnBCMzQ