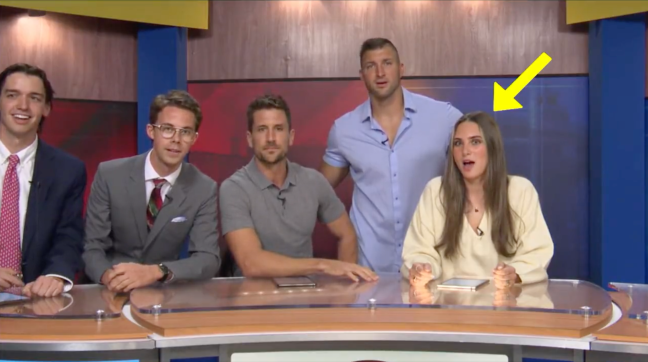 Ole Miss football is celebrating Eli Manning’s jersey retirement this weekend and everybody and their mother is in town. Among those in attendance is the crew at SEC Network’s game day morning show.

The SEC Nation crew set up their set in The Grove on campus, but Tim Tebow and Jordan Rodgers had different plans. As Laura Rutledge, Paul Finebaum, Ryan McGee, Marty Smith and Marcus Spears hung out in the tailgating mecca of college football, the others slipped out to cause some trouble.

Of the many things that Ole Miss is known for, it has an excellent journalism and media program. I would know.

Each night, Monday through Friday, a team of students work together and put on a half-hour newscast. On Friday, ahead of the LSU game, they were joined by some guest anchors.

In the middle of the nightly broadcast, Tebow and Rodgers crashed the party. At the the end of the show, Rodgers signed off with a Ron Burgundy classic.

The whole thing was hilarious, and the female anchor’s face is priceless, but the funniest part might be the fist bump/handshake mishap at the 25-second mark: