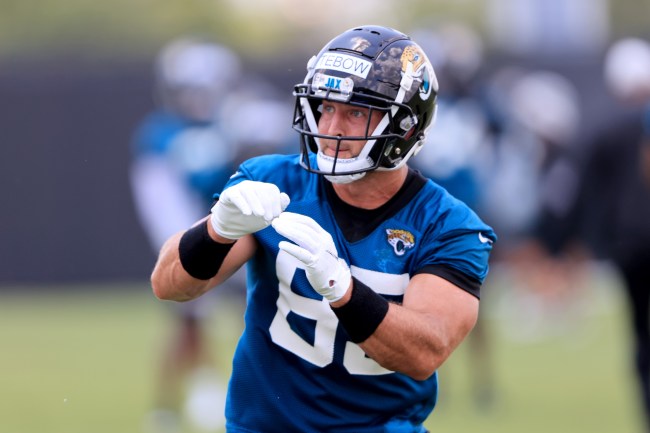 Just a day after he signed with the Jacksonville Jaguars back on May 20th and took the practice field for the first time as a tight end, Tebow’s jersey sales skyrocketed despite the fact that he hasn’t secured a roster spot on the team.

10 days later and Tebow’s jersey sales are still going strong. According to the NFL shop, Tebow has the top two selling jerseys in the league. For comparison’s sake, Trevor Lawrence, the #1 overall pick in the draft has the 14th best-selling jersey.

Here's a look at the top selling player jerseys in the NFL 👀 pic.twitter.com/uCImRKOk1T

Lawrence seems like he’s all aboard the Tebow train as well. During a recent interview, the Jags’ rookie QB had nothing but good things to say about Tebow.

“I’ve had a few good conversations with him and I’m really excited to play with him,” Lawrence said. “I don’t know if you’re going to find a better guy to have in your locker room, and he’s in great shape, he looks great, he’s been out there practicing with us the last two days and Thursday of last week. Three practices in, he looks great, he’s running around well. Picking it up quick, I think mentally, he’s in a great spot, being a quarterback and playing in the NFL for a number of years, he kind of gets the NFL offense, pro-style offense systems, he kind of picks them up easily so he’s coming along great. And I think just everyone’s excited to have him in the locker room, seeing what he’s been able to do, the ultimate competitor he is and his character, that’s just a guy you want on your team for one, and a guy you want to be around.”

It’s only a matter of time to see if Tebow is a legit NFL player or is just being used as a publicity stunt by the Jaguars to sell jerseys and tickets.