14 Tips for Getting Ripped as Fast as Possible 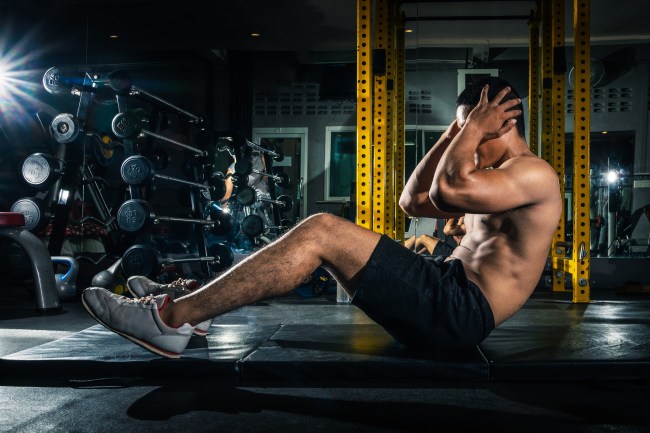 It happened again. You got too caught up in your winter bulk, too obsessed with the progress you were making on your lifts – and now, summer’s here, and you have the body definition of a marshmallow.

Thankfully, help is at hand. These tips for getting ripped fast offer a ton of helpful (and occasionally unhelpful…) dieting advice, and they’re designed to supercharge your summer weight loss. It’s time to get ripped, bro!

Your mom!  High Intensity Interval Training! It’s one of the hardest styles of cardiovascular training around, but it’s also one of the most effective. Mixing-up intervals of low-intensity walking and jogging, with short bouts of balls-to-the-wall sprinting, is the most effective way to burn calories and get your daily cardio in. It’s not easy (unlike your mom), but you’ll be able to burn a ton of calories in a fraction of the time it would usually take.

Stop being the Abominable Bro-man

We aren’t all blessed with smooth, hairless bodies, and many bodybuilders are blighted with body hair somewhere on the spectrum between Hugh Jackman and Big Foot. If you’re closer to the latter than the former, and your stomach hair has earned you the nickname of The Abominable Bro-man, take a razor to yourself. Shaving will make your abs more visible, and you’ll be more motivated to step-up the weight loss.

‘Benches 315, weighs 405. Trainers hate him!’
Make weight loss a competition, and lay-down the gauntlet to your bros. Sharing the same goals will motivate you to work harder than ever, and there’s nothing more enjoyable than a bit of trash-talk.

Intermittent Fasting is the practice of ditching breakfast, and fasting for 16 hours overnight. It’s got a great track record for fast fat loss, and it’s one of the few diets still capable of encouraging simultaneous muscle gain.

Protein helps repair and build muscle mass, and it’s regarded as one of the most satiating food groups. Upping your protein intake will help you stay fuller for longer, and it’ll minimize the amount of muscle wastage caused by cardio.

Beer is stuffed full of calories, and a single bottle of dark beer can pack-in as many calories as a small meal. If you’re determined to get your drink on, spirits are the way to go – and a couple of shots, combined with a sugar-free mixer, will get you buzzed at a fraction of the calories of beer.

Take control of your bitches

…and walk your pet dogs as frequently as possible. It’s a low-impact exercise that requires very little effort – and although it won’t burn a ton of calories, it will help contribute to your day’s overall calorie deficit. It’s also a great way to meet more bitches… and their female owners.

Ditch the dumbbells and hit the barbell

Compound exercises recruit more muscles than isolation exercises, triggering greater muscle growth and burning more calories. When you’re dieting, and low on energy, it makes sense to burn calories and build muscle as efficiently as possible – so build your workouts around the squat, dead, bench and press.

Start exposing yourself to girls

Woaahhhh dude, I didn’t mean that!

Despite being the creepiest tip on this list, there’s a nugget of legitimate wisdom to this suggestion. Most of the time, girls aren’t as fussy about weight and body fat as we think they are –and the only person heartbroken by your inability to cut from 8% body fat to 7% is… you. Be proud of your hard work, and get yourself some attention. You’ll be surprised by the positive reaction, and you’ll be motivated to keep heading down the road towards shredded.

Find yourself a fitness app

Fitness apps offer a quick and easy way to measure your weight, calories and progress. My personal favourite is called Grindr – it’s packed full of inspiring physiques, and I receive compliments on my glute definition on a daily basis. Wait a minute…

Pack some junk in the trunk

Avoid being a complete miser, and allow yourself the occasional cheat meal. Junk food isn’t inherently bad for you, as long as you monitor your calorie intake – and because few things in life are better than a double bacon cheeseburger, you’ll be happier about dieting.

Start curling in the squat rack

The next time you see a big guy going for a squat PB, head for the squat rack, and start curling behind him. Whilst the curls themselves won’t improve your fat loss, being chased by a rage-filled 300lb bodybuilder definitely will.

When all else fails, it’s time to turn to the humble marker pen. There’s nothing on earth that will make your abs pop as much as a black-inked outline, and best of all, it requires absolutely no cardio.

Ain’t nothin’ to do but to do it

In the wise words of Mr. Ronnie Coleman, when all is said and done, there ain’t nothin’ to do but to just goddamn do it. Weight loss is a slow process, and the only surefire way to get ripped fast is start on the diet right now. So what are you waiting for? It’s time to get up off your ass, and head straight for the gym.