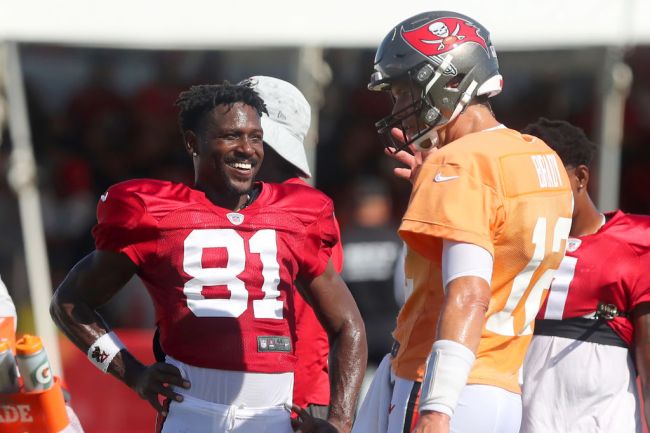 Tampa Bay Buccaneers wide receiver Antonio Brown was thrown out of practice on Thursday morning. During a joint practice with the Tennessee Titans, the 33-year-old got into it with cornerback Chris Jackson.

The exchange began with Brown saying “don’t grab me” on a play that he believed should have been flagged for holding. Jackson responded by saying “don’t push me in my face” and the two locked helmets.

Brown then ripped Jackson’s helmet off of his head and a fight ensued. When things cleared out, AB found himself being sent to the sidelines.

Antonio Brown with a hard left to rip off the helmet of Titans defensive back Chris Jackson.
Fight day at One Buc Palace. pic.twitter.com/Fdgu9yT3Q3

After some time to cool off, Brown was allowed back on the field.

Prior to the week of joint practice, Bucs head coach Bruce Arians said on Sunday that he and Titans head coach Mike Vrabel set a no-fighting policy. That did not stop things from getting chippy.

Actually, it didn’t work at all.

Multiple fights broke out between the two teams on Thursday morning. Brown and Jackson went at it first and then Tennessee receiver Fred Brown and Tampa corner got into it.

Titans WR Fred Brown and Bucs CB Herb Miller both go the ground and a scrum ensues at midfield. Brown was on top of Miller and wouldn’t be pulled off.

Not long thereafter, a scuffle broke out amongst special teams.

A second larger scuffle now in special teams work — looked like K.J. Britt and Pat O’Connor involved on the Bucs end. Large group getting in to break things up.

Minutes later, Devin White was at the forefront of a scrum.

We have a fourth fight right now…Devin White just wrestled a Titans running back to the ground. Whole teams came out…

Even Vrabel had to get in on the scrum to break it up!

And now the biggest tussle of the day breaks out. @Titans HC Mike Vrabel gets in the middle to break things up in a large group of players with @Buccaneers and Titans.

(No videos of these because it’s a non-shooting period).

To close out the day, a pair of lineman got after it a little bit.

Another fight. Jeffrey Simmons wouldn’t let go of Fournette after a play, and Ryan Jensen took exception. Took both units to pull them apart

Jeffrey Simmons, who has had notably questionable morals in the past, spoke about the eventful day after practice had finished.

Tampa Bay and Tennessee will square off on Saturday night for their second preseason games of the season. Arians has already said that he won’t play his starters, in large part because of the intensity he expected from the join practices throughout the week.

He certainly got that part right.