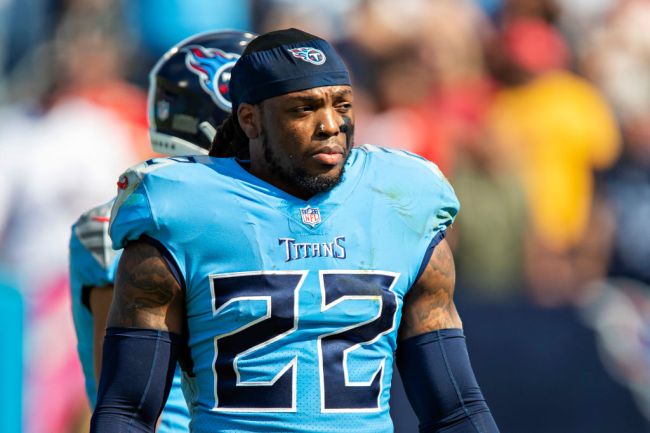 The Tennessee Titans could be without their most valuable player for the rest of the season. According to multiple reports, Derrick Henry suffered a foot injury during Tennessee’s win over the Indianapolis Colts on Sunday that could force him to be sidelined for the rest of the year.

Henry appeared to receive medical attention on his right foot late in the second quarter of Sunday’s game but returned almost immediately and rushed for 68 yards.. He is set to undergo an MRI on Monday to determine the full extent of the injury.

Tennessee is concerned that he may have a Jones fracture, which would require surgery.

Ian Rapoport has suggested that if Henry does in fact have a Jones fracture, he could be out for a total of eight weeks. This would mean he could be available for the playoffs if Tennessee makes it to the postseason.

This is obviously a cataclysmic blow for the Titans as Henry has led the NFL in rushing each of the last two seasons and was well on his way to do the same this season as he leads the league in rushing with 937 yards on the year.

Henry is without question the most important piece to the Titans offense and you could absolutely make the argument that no other team in the league relies more heavily on one player than Tennessee does with Henry.

The Titans currently hold the top seed in the AFC with their 6-2 record. Without Henry in the backfield, it’ll be an extremely difficult task to finish anywhere near the top of the AFC come season’s end.

Listen, I love this guy, this stinks, it's a brutal sport. That said … they had this guy on pace for 465 carries, notwithstanding the playoffs. The most anyone's had is 416. I'd have been stunned if he made it out unscathed. https://t.co/bzjguAAXnA

If Henry is out all year, the Titans shouldn’t trade for a running back — they should trade for a wide receiver. No back can replace Henry’s volume and play style. You’re going to have to pass more — add depth so you can actually spread the field out. https://t.co/aWpf5EauA7

I've broken my foot twice…. I knew as soon as he was walking with no cleat on grimacing. Jones fracture https://t.co/BOS9tHuiUI

Not sure if the “next man up” mentality applies here since Derrick Henry is not human. Absolutely crushing, no doubt. #Titans