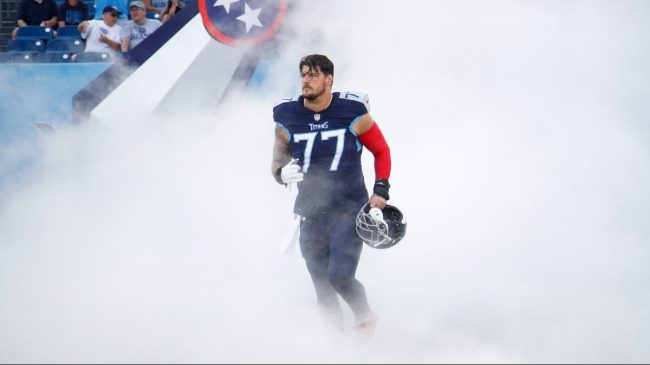 The Tennessee Titans took a brutal hit after left tackle Taylor Lewan fell to injury. He suffered the same knee injury as the first one, which is never a great sign for anybody. Now, Lewan opens up about the situation as he ponders what’s in store for his future.

During an episode of his podcast Bussin With The Boys, Lewan opens up about his situation. He’s suffered this exact same knee injury two seasons ago and reveals it never quite healed. Taylor Lewan hasn’t quite been the same since tearing his ACL in 2020. The Titans left tackle explains exactly what’s going on with his knee, per Sports Illustrated.

“Last year during the season, I had issues. My knee was swelling up. My knee was swelling up. I was always feeling pain in there, and I was like, ‘I don’t know what the deal is.’ Turns out this year, I found out that there are things with my knee going on now that are a direct correlation to what happened when I got my knee done. So, I have to go and get my knee fixed, to be able to play football or to live like a normal life in general.”

It’s unfortunate the learn that Taylor Lewan’s original knee injury never fully healed. It clearly gave him issues throughout the 2021 season. Now, facing another rehab on the same knee, the Titans left tackle reveals his thoughts on what’s in store for the future.

According to Sports Illustrated, Taylor Lewan states, “So like I kind of sit there and wonder, ‘What if I am done as a Titan?’ Because you never know what’s going to happen. What if it is over for me? What if football is done with me? … I’ve got a lot to think about. I’ve got a lot to do in the next few months to figure out what I want my life to look like in the future.”

Lewan has expressed in the past that if the Titans were to cut him he’d retire from football. Due to the unfortunate knee injury, that very well could be the case. We won’t know exactly how it will play out until next offseason. So with that said, keep an eye on Taylor Lewan, as his future is truly up in the air.