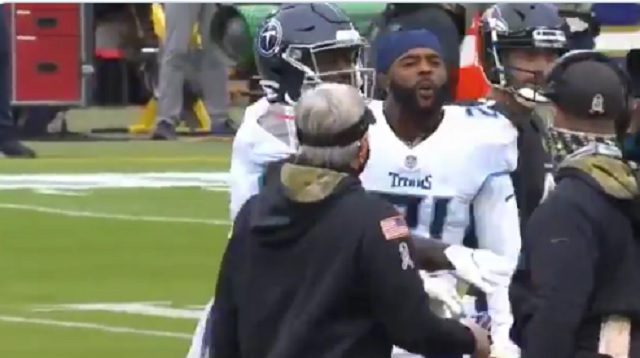 Things got heated between the Titans and the Ravens on Sunday before the game even started.

During pregame warmups, several Titans players convened at the midfield logo in Baltimore which led to head coach John Harbaugh to come out to confront them.

Titans Malcolm Butler could be seen cursing at a heated Harbaugh as refs separated the two teams.

Ravens players weren't on the field yet when Titans met at midfield logo. Ravens coaches were out there and Harbaugh started walking toward Butler as the two exchanged words. They were ultimately separated but then Vrabel came out. Refs were between Vrabel and Harbaugh.

Uh oh. Midfield logo drama here at M&T Bank Stadium. The #Titans came out and went right to midfield on the logo. John Harbaugh came all the way out and took offense. Mike Vrabel and Harbaugh then had a spirited chat. Throw the records out!!!

Here’s the video of the altercation.

Kickoff hasn’t even started yet and there’s already tension. Titans came out and stood on the logo and Harbaugh came out to say something pic.twitter.com/LN0JQTuRYw