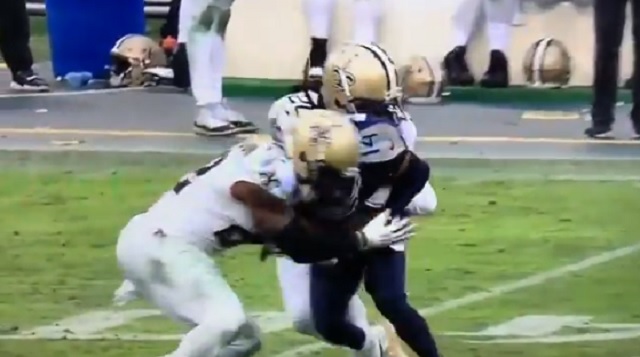 There was a scary scene that unfolded during today’s Saints-Titans game.

Fans and media members were angry that a penalty was not called and the broadcast team didn’t address the situation for whatever reason.

Kalif Raymond was defenseless. These refs are clueless🤦🏽‍♂️.

No flag against the Saints for hit to the head… ok.

He is unconscious on the field and we’re going to pretend nothing happened. pic.twitter.com/fSBP6iJFlU

Instead, Saints ball 1st & 10 at the Titans 25 after the no call and fumble return and a Saints TD follows.

Kalif Raymond was visibly knocked out on this reception/fumble. There was not a mention of it on the broadcast or a flag for a dangerous hit to the head pic.twitter.com/wAejkeYdrL

By the rules, Gardner-Johnson lead with his shoulder pad into the head of the receiver Kalif Raymond. That’s technically a personal foul, and in some cases you’d get ejected in NCAA for it.

For all the talk the NFL gives to player safety, this was really bizarre. https://t.co/BgFWS44ZN4 pic.twitter.com/m7sxB6eTO7