T.J. Watt Reveals He Broke One Of The NFL’s Most Pointless Rules 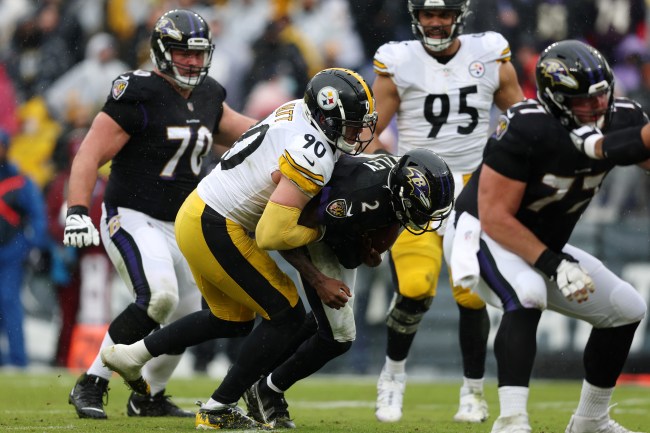 In week 18 of the NFL season, the Pittsburgh Steelers were fighting for their playoff lives. However, one of their players also had their sights set on something else in the game. T.J. Watt had the chance to break the NFL’s single-season sack record in that game.

There were multiple times throughout the game where he brought down Ravens quarterback Tyler Huntley and it seemed like he may have broken the record. Unfortunately, neither Watt nor anybody else was particularly sure whether or not he was actually being credited with the two sacks he needed.

T.J. Watt told Dan Patrick, that led him to check his phone at halftime for an update on where the record stood.

According to Dov Kleiman, it is actually illegal to check your phone during halftime of an NFL game.

#Steelers LB T.J. Watt admitted on the @dpshow that he used his cellphone during halftime of the #Ravens games in hopes to find out if he broke the single season sack record.

According to league rules, that is prohibited.pic.twitter.com/SWTBP0BV0A

It makes you wonder, what exactly is the point of this rule? What could a player accomplish with a cell phone at halftime that they can’t with the tablets on the sideline or coaches who aren’t down on the field communicating with them or fans right behind the bench with cell phones? What is the fear here?

There are plenty of pointless rules in the NFL, like just about everything pertaining to uniforms and this new taunting nonsense, but this seems like the biggest waste of a spot in the league’s rulebook.

Hopefully T.J. Watt doesn’t end up getting fined for this and hopefully the NFL will leave this rule to The Bachelor from now on.