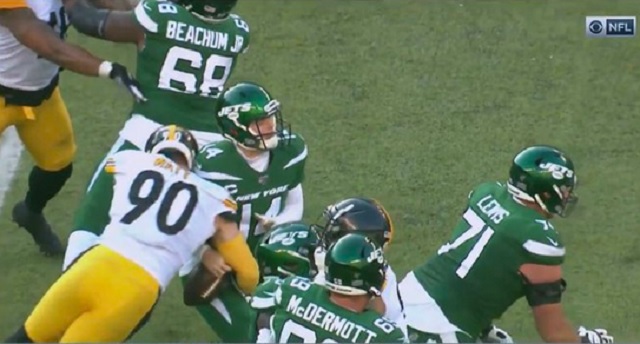 TJ Watt is probably this year’s defensive player of the year and he’s still finding new ways to cause turnovers.

In the second quarter of today’s Jets-Steelers game, Watt sacked Sam Darnold and caused a fumble.

Upon closer inspection, it appeared that Watt punched Darnold in the balls to force the fumble.

Pretty sure TJ Watt also punched Sam Darnold in the balls along with the strip sack and fumble recovery. I think Dan Fouts knew what he was saying. 😂😂😂😂#HereWeGo pic.twitter.com/zjES8jHN48

Not only did TJ Watt force the strip sack, but I believe he also just stripped Darnold the opportunity of having kids in the future with that straight shot to his manhood.

TJ Watt for DPOY (Dick Punch of the Year) pic.twitter.com/AK7LA6ZO6F

@_TJWatt with Dick Punch of the Year #DPOY @steelers pic.twitter.com/hI5L6TLYYy