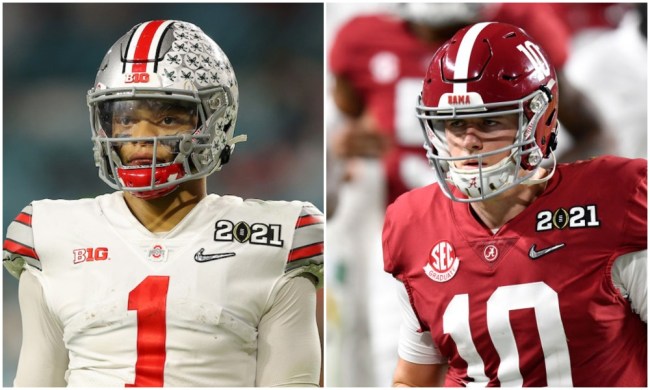 NFL Draft day is here, meaning that 2021 mock drafts only have a few more hours before they’re even more irrelevant than they already are. ESPN’s Todd McShay released the final version of his mock draft on Thursday morning, and credit to him for sprinkling in a few surprise picks this close to the start of the first round.

Contrary to his previous mock draft, his final cut doesn’t include many trades, but the two big outliers are quarterbacks Justin Fields and Mac Jones.

McShay has Trevor Lawrence going first overall to the Jaguars, Zach Wilson to the Jets at No. 2, and the 49ers taking Trey Lance with the No. 3 pick. If that is how things turn out then the question becomes, how far could Jones and Fields drop?

The Broncos sent a sixth-round pick to the Panthers on Wednesday in exchange for Teddy Bridgewater, but McShay still thinks Denver will take Fields with the No. 9 pick giving them a rather crowded QB room with Drew Lock and Bridgewater already in the fold.

“Make no mistake, trading for Teddy Bridgewater doesn’t take Denver out of the QB running. Making such a move further calls into question whether the Broncos believe Drew Lock can be their guy, and if they don’t, then Bridgewater shouldn’t be the final answer, either,” McShay explained. “Fields is extremely accurate with a big arm, and he could be the franchise starter the Broncos are looking for.”

What’s a mock draft without Bill Belichick and the Patriots making a splash and having a player seemingly fall in their lap just like they want to happen? McShay sees Jones falling to New England at No. 15 and the Patriots getting their pro-style quarterback that should benefit in the Pats’ system.