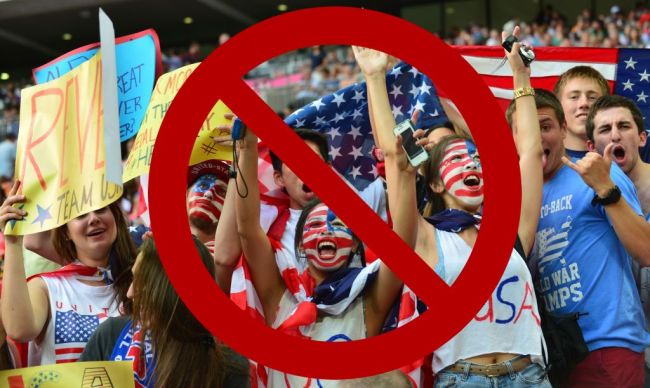 Fans will be allowed at the Tokyo Olympic Games this summer but they will be asked to sit silent. Cheering is banned.

Organizers banned spectators from abroad several months ago. They announced recently that each Olympic venue will have a limit of 50% capacity— up to a maximum of 10,000 fans. However, the local fans will be under strict rules.

Those in attendance will not be allowed to cheer, they must wear masks and are being told to go straight home after the event.

Asking fans to remain quiet during the Games is preposterous. At that point, they may as well be kept out.

The logic might make sense— no cheering means less particles in the air, which in turn should help limit the spread of COVID-19. But the chances of that happening are slim to none. And, as we have seen at sporting events around the globe, limited-capacity, socially-distanced fans who are allowed to cheer is very doable.

Nonetheless, Tokyo will remain noiseless as the world’s best athletes compete for their nation’s sporting supremacy.

The atmosphere at the Games is already set to be underwhelming, as the brand-new, massive stadiums remain relatively empty. Without cheering, the Olympics may as well be played in a bubble, much like the NBA in 2020. It will be way less exciting.

Passionate crowds cheering home their countryman is what makes the environment so special. That will be nonexistent.

While the capacity limit is set at 50%, officials said that if COVID-19 cases continue to rise, the rules could be changed. Attendance could still be barred. The decision to allow fans at all comes as opposition among Japanese citizens remains high.

New infections in Tokyo have begun to subside, so resistance toward the Games may be softening. Still, health officials fear that crowds could cause cases to spike again. Much of Japan is not vaccinated, which could lead to another rise in cases as a result of the Olympics.

In fact, just last week, the country’s top medical advisor recommended that holding the Games without fans would be the safest way to proceed.

The recent decision to allow fans comes right as Tokyo is coming out of a state of emergency. The curve of new cases has flattened and the seven-day average for new infections is about 400 daily.

The capital city and surrounding areas are under “quasi-emergency” status until July 11th and the Games are scheduled to begin on July 23. New rules allow restaurants to serve alcohol during limited hours.

This summer’s Olympic Games are going to be very different. Not only will fans be reduced and muzzled, but athletes and their support teams will be under strict protocol. Tokyo officials released a 32-page “playbook” earlier this year and it will be a completely different experience. Some of the highlights include:

As for the culture of the Olympic Village, which is known to be a sex-fueled raucous in a normal year, it will be on a near-lockdown. The Games still plan to provide a lot of condoms for the event, but they are giving them out when the events are over and asking athletes to take them home.

All in all, it’s going to be a very business-focused year. There are billions upon billions of dollars tied up in the Olympics and getting them done is the priority. Even if that means silent arenas.