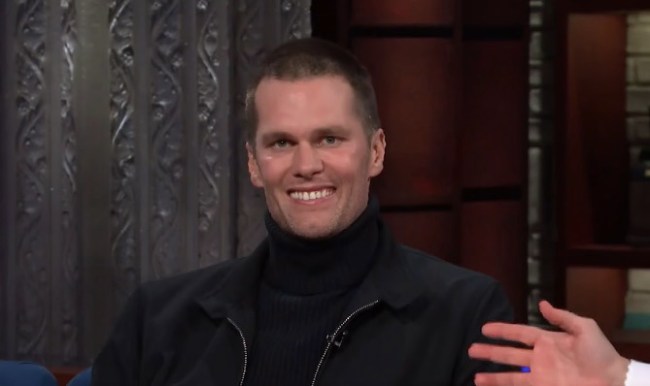 The words Tom Brady and athlete usually don’t follow one another too often — and with good reason, because when I think of the New England Patriots quarterback, I usually envision him at the NFL Combine having the physique of a car salesman, not a guy with future GOAT status. But, before you go ahead and write off Brady’s athletic feats, I’m just going to ask you a simple NFL trivia question.

Name the only NFL quarterbacks to have at least 60,000 yards passing and 1,000 yards rushing in their career. The answer: Brett Favre. Yep, that’s it.

Until four more yards, that is, when good ol’ Tom Brady eclipses the 1,000 career rushing mark to join the ol’ gunslinger. That’s actually a pretty remarkable stat, and one that deserves some attention.

Low and behold, NFL Films is giving Tommy boy the recognition that 1,000 yards deserves, making this awesome, entertaining, educational and in-depth video about Brady’s quest to that sacred 1,000 yards. Take a look below, because it’s pretty awesome.

The video helps put Tom Brady’s soon-to-be milestone in perspective, not only dropping the knowledge about Favre being the only guy to have 60,000 career passing yards and at least 1,000 career rushing yards, but also comparing No. 12 to other great quarterbacks like Dan Marino and Peyton Manning. It’s a unique angle to show that, though all in good fun, it’s pretty F’in awesome for Brady to hit that mark.

What’s even crazier is how the video mentions Tom Brady may have sacrificed about 200 yards worth of rushing in straight kneel-downs, which means a couple things. First, Brady’s winning a helluva lot (which we already knew) and second, that he may be the greatest dual-threat quarterback in NFL history if not for those lost yards. OK, so that last part’s kind of a joke.

Still, pretty awesome stuff from NFL Films here to show how Tom Brady just continues to break milestones in the league. Hard to believe that, among other quarterbacks with 60,000 yards passing in their career, this guy is one of two with over 1,000 career rushing yards.

Tom Brady running the 40 in khakis (5.28 seconds) at the NFL Combine pic.twitter.com/te5Se2e4an

Hey, kids, remember that anything is possible.