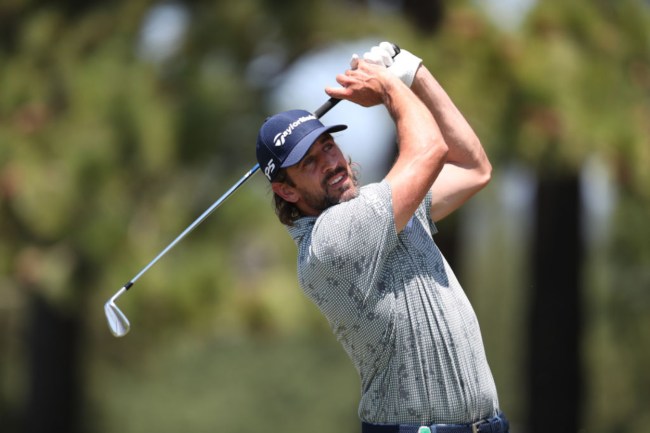 The sixth edition of ‘The Match’ will take place in Las Vegas on June 1 and for the firs time ever, professional golfers won’t be participating. Instead, four of the best quarterbacks in the NFL will do battle on the links.

The veteran team of Tom Brady and Aaron Rodgers will take on Josh Allen and Patrick Mahomes.

We tried to make this a tag team cage match but the lawyers said our contracts wouldn’t allow it…#CapitalOnesTheMatch is back, June 1st. Let’s kick their ass @AaronRodgers12 | @JoshAllenQB @PatrickMahomes pic.twitter.com/3ByQqBkIJR

The match is set to take place at Wynn Golf Club, which is the same course that hosted the fifth edition of ‘The Match’ last November when Brooks Koepka took down Bryson DeChambeau.

Brady and Rodgers were a part of last July’s match that saw Phil Mickelson and Brady lose to Bryson DeChambeau and Rodgers at Moonlight Basin in Big Sky, Montana.

“Live coverage of the match play event from the Wynn Las Vegas golf course will once again feature unprecedented access with players having open mics throughout the entire competition, including the capability to communicate directly with their competitors and the broadcast commentators,” a press release from Turner Sports read.

NFL and golf fans both shared their reactions to ‘The Match’ on social media:

Probably be the first time I ever watch golf tbh https://t.co/rmQlmMZ8xM

This going to be a sweep for Rodgers and Brady. Lightwork. https://t.co/LM5rKr9cFb

This is going to be pure comedy 😂😂 https://t.co/xVrWjm6Aqb

inject it into my veins https://t.co/aVLh3FuvG7

This is going to be AMAZINGGGGG🤩 https://t.co/OLokdDirK5

This is actually pretty sick. https://t.co/bdJixf2rQG