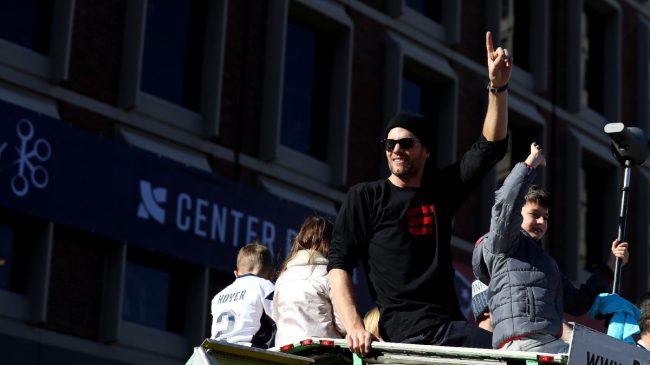 Tom Brady is the ultimate competitor on the football field.

The unanimous GOAT, Brady has won seven Super Bowls while playing for two different organizations. He’s led the NFL in passing four separate times. He’s been the league MVP in three seasons. He’s thrown for more yards than any other player in NFL history.

Brady’s success on the gridiron is unrivaled.

It seemed that his illustrious career was coming to an end after the 2021 season when the passer announced his plans to retire. Those plans soon changed as he broke news of his return just two short months later.

Now, he’ll try to get the Bucs back to the Super Bowl after falling just short a season ago.

Apparently, Brady’s competitive spirit doesn’t just stay on the football field, though. It trickles over to the basketball court, too.

On Tuesday, he was seen playing a little 1-on-1 against his son, Jack. The elder Brady showed no mercy to the 14-year-old, swiftly landing a W and posting it to social media.

The quarterback flashed some smooth skills on the floor, showing off his jump shot and ability to get to the rim. You can hear him say, “It’s over now,” as he gets a bucket to take a slight lead.

Brady will have to enjoy these wins while he can. The NFL season will be here before he knows it, and Jack won’t be 14 forever. Next time around, it might be the younger Brady that comes out on top.