Tom Brady Didn’t Inform Bruce Arians Or The Bucs About Retirement, They Learned About It From ESPN Report 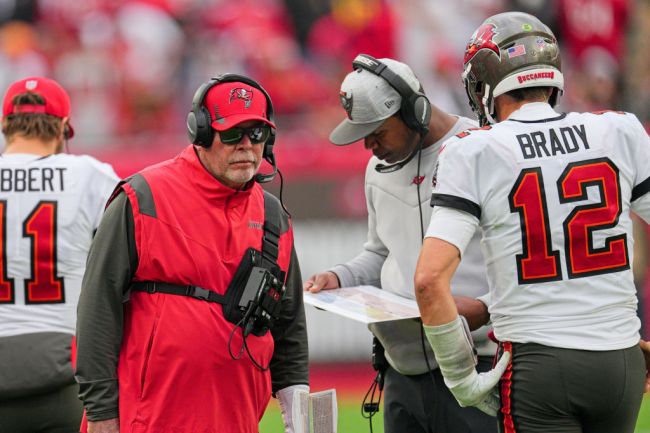 Tom Brady is apparently retiring from football, and the Bucs were caught off guard when the news dropped.

On Saturday afternoon, ESPN’s Adam Schefter and Jeff Darlington reported that Brady is retiring from the NFL after 22 seasons.

Tom Brady is retiring from football after 22 extraordinary seasons, multiple sources tell @JeffDarlington and me.

Sources said that Brady’s decision to retire is based on several factors, including family and health. While less significant, Brady also recognizes that the Buccaneers are likely to undergo significant roster turnover, sources said.

According to Bucs beat reporter Rick Stroud, Brady has yet to tell the Bucs that he’s retiring.

Pump the brakes for a bit.
Tom Brady has not informed the Bucs of his plans to retire. “No, he hasn’t that we know of,” Bruce Arians told me. “Agent (Donald Yee) just told us he hasn’t made up his mind.” https://t.co/1pb7AC4U45

It’s coming from his official company’s social media. TB12 said thank you. But it’s interesting the Bucs weren’t told ahead of time. https://t.co/x8M3zdePyi

In the end, Tom Brady or his associates let @AdamSchefter and @JeffDarlington know he was retiring, had it confirmed I guess on @TB12sports website but didn’t tell the Bucs. https://t.co/x8M3zdePyi

I’ve got the same information here. If Brady is retiring, which is very possible, he hasn’t told the Bucs yet. https://t.co/GNEFsrJhzz

Update: The Bucs claim Brady is refuting ESPN’s report and still has not made up his mind about retirement.