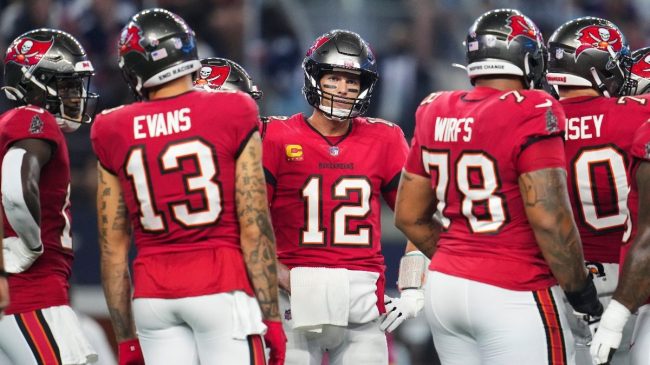 Tom Brady made the decision to unretire and play in the 2022 season with the Tampa Bay Buccaneers. He’s claimed for a while now that he’s wanted to play until he’s 45 and after this year, he’ll achieve that goal. However, his latest comments have fans pondering whether or not the future Hall of Fame quarterback made the right decision to keep playing.

In an episode of Let’s Go! With Tom Brady, Larry Fitzgerald, and Jim Gary, the Buccaneers’ star quarterback spoke about the bumps and bruises he sustained in the season opener.

“When you’re younger, your body is a lot different. And when you’re 45, your body changes a lot. What am I dealing with now? I woke up today going ‘holy s— that was a few hits.’ And you look at your arm and you’ve got bruises and you’ve got cuts and the way it is, you go, ‘Okay how much longer do I want to make this commitment?’ And I obviously made the commitment for this year‚ and everything is going to be like always—continue to evaluate all these different aspects of play.”

It kind of sounds like Tom Brady is questioning his decision as well. However, Kimberly A. Martin might have nailed it on the head with her take on Brady’s comments.

"[Tom Brady] sounds like he wants to divorce the game, but can't let it go!"

We’re likely to see Brady play out the rest of the season for the Buccaneers. He’s not one to quit, obviously. The end of his career has been speculated for what feels like forever. However, everything has been indicating that this is his final year playing football. We’ll have to wait and see though, as when it comes to Tom Brady, you never know.