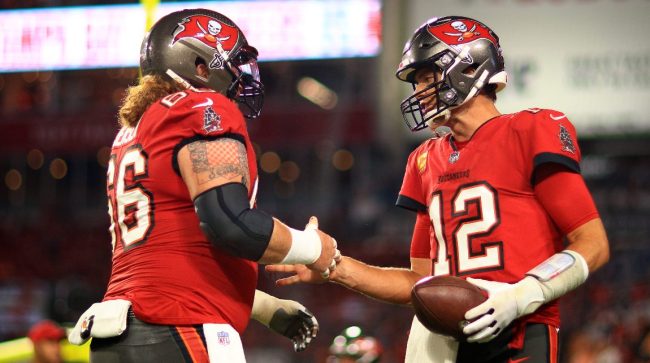 The Tampa Bay Buccaneers are gearing up for a big year, as Tom Brady might be making his final push for Super Bowl glory. However, the organization took a hit recently after Ryan Jensen fell to a season-ending injury. During the Buccaneers’ training camp on Monday, Brady shared how upset he and his teammates are while the franchise faces new roster dynamics.

According to Rick Stroud, Tampa Bay is dealing with a huge loss at center with Jensen out for the year. The entire Bucs organization is clearly upset, as Tom Brady says himself that everyone is “heartbroken.” Even so, it sounds like everyone is putting faith in Robert Hainsey as he is in line to possibly be the new starting center.

#Bucs QB Tom Brady said everyone is “heartbroken” about losing C Ryan Jensen. Says a lot of people have confidence in C Robert Hainsey but it’s not what you did last year or in practice. “It’s to be determined for all of us.” pic.twitter.com/sBXQtdFKk9

Tampa Bay is going to be susceptible within the interior offensive line this year. That’s not great for Tom Brady at all, as opposing defenses will be rushing him up the middle often. Even so, the Buccaneers must move on and rely on Robert Hainsey in training camp. Players get hurt every year and it’s important to have that “next man up” mentality in the NFL.

So, despite Brady and the Buccaneers being “heartbroken” for Ryan Jensen, everyone seems to be on board with Hainsey potentially taking over as the starting center. He’s entering the second year of his young career after spending most of his rookie campaign as a backup. He participated in nine games last year but will have a much bigger workload with Ryan Jensen out of the lineup.

We’ll see how it plays out, as the Buccaneers could get lucky if Robert Hainsey performs well. If not, then Tom Brady could have a long year ahead.