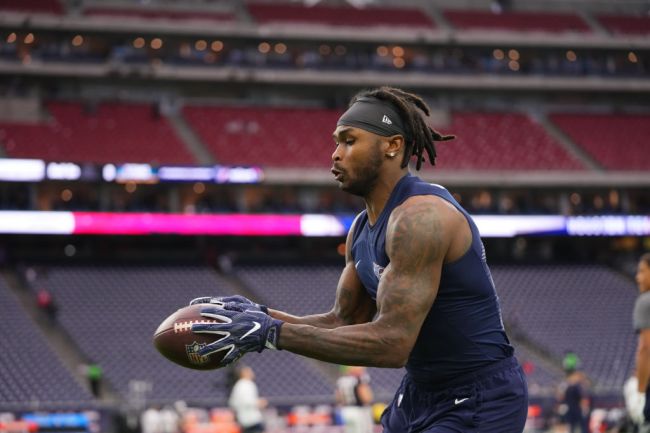 There are few teams in the NFL who have been close to as loaded as the Tampa Bay Buccaneers at wide receiver over the past couple of seasons.

The last two seasons saw them feature Mike Evans, Chris Godwin, and Antonio Brown at receiver. Antonio Brown left the team in the middle of a game near the end of the 2022 season, but the Bucs brought in Russell Gage through free agency to keep the receiving corps strong.

It turns out that wasn’t enough for the Bucs as they’re now adding another Pro Bowl receiver to their roster. According to ESPN’s Adam Schefter, the Buccaneers are signing Julio Jones to a one-year contract.

Seven-time Pro Bowl wide receiver Julio Jones is signing a one-year deal with the Tampa Bay Buccaneers, per source. The soon-to-be 45-year Tom Brady now will have a chance to throw to the 33-year-old Jones.

With Chris Godwin currently recovering from a knee injury he suffered at the end of last season and Rob Gronkowski heading into retirement, it seems the Bucs thought Tom Brady could use some reinforcements.

Julio Jones is an interesting option to provide that reinforcement. Jones was one of the NFL’s best receivers for much of the past decade, but has struggled over the past 2 seasons. The struggles began with an injury-riddled 2020 season and carried into a 2021 season where he once again dealt with injuries, but also showed signs of decline when healthy.

The Bucs’ pass-heavy offense could be the perfect opportunity for Jones to show that he still has something left in the tank. Tom Brady led the NFL in pass attempts last season and should be looking Jones’ way frequently early on in the season.

With Jones signed for just one year, it’s a low-risk move with the potential for a huge reward that could keep the Bucs as one of the NFL’s best passing offenses in 2022.