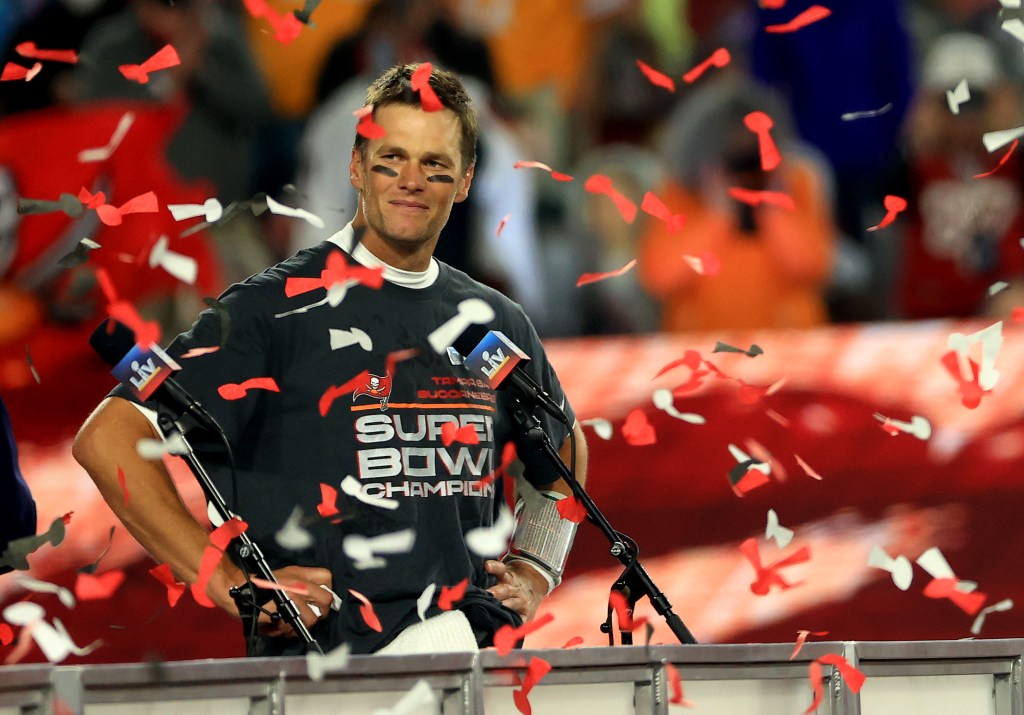 As a lifelong Tampa Bay Buccaneers fan, I feel like I’ve been suffering from Imposter’s Syndrome throughout this entire season. I asked my better half last night if she could remember a single time in the decade we’ve been together that the Bucs were good, she couldn’t. Honestly, the last time I remember being truly hopeful about the Buccaneers was in January, 2008 when the Bucs pulled out an early half lead against Eli Manning and the Giants. I was watching that game at Mad River on the Upper East Side and things were going great, until they weren’t. Then Eli went on to win the Super Bowl over Tom Brady and the New England Patriots and now it feels bit like I’ve come full circle with Brady winning the Bucs’ second championship in franchise history.

Loooking back at that 2003 Super Bowl when the Buccaneers defense completely embarrassed the Raiders, I honestly don’t remember a ton about that season. I remember who I was watching that game with, where I was, what I was eating, and the record-setting defensive performance. But I don’t remember much about that actual season. This one, though, it’s so fresh and with Tom Brady as our quarterback it’s almost like I felt guilty for even using the bathroom mid-game. As if I had to cherish every single second of Tom Brady in a Buccaneers uniform (and I did).

So where does this Super Bowl historically rank against Tom Brady’s other Super Bowls? Well, this was the first time that Tom every had to beat Drew Brees, Aaron Rodgers, and Patrick Mahomes on his way to another ring, three former Super Bowl MVPs. That alone probably makes this Tom’s most impressive. But here are some more stats to blow your mind:

The Bucs are the 1st team with four 30-point games in a postseason.

They are the 1st team to beat 3 SB MVP QBs in a postseason (Mahomes, Rodgers, Brees)

Tom Brady is the 1st player in NFL history with 50 Pass TD in a season (including playoffs) for a Super Bowl champion. pic.twitter.com/VbPVbhKg7S

So much of the discussion about this Tampa Bay team was focused on the defense but the offense was reliably explosive. They established the run and were successful with the deep ball. Truly amazing.

That defense though, they punished Mahomes unlike anything that’s really been seen in the past decade:

Patrick Mahomes dropped back to pass 56 times and faced a blitz on just 6 of those dropbacks (11%).

Of the 29 pressures he faced Sunday, 27 came against a pass rush of 4 or fewer defenders.

That's the 2nd most pressures against 4 or fewer rushers over the last 10 seasons. pic.twitter.com/Qo8XQUFL60

Patrick Mahomes was pressured more in this game than any QB in Super Bowl history (29), passing the record of 25 by Jim Kelly in SB XXVI.

Tom Brady faced his fewest pressures (4) in any Super Bowl of his career pic.twitter.com/CnRaG7gR5s

Mahomes should not have had to run that far. His offensive line let him down. Chiefs fans will remember the refs more than the offensive line but the line lost the game.

According to @NextGenStats Patrick Mahomes ran a total of 497 yards before his passes/sacks tonight.

That's the most pre-throw/pre-sack yards run by any quarterback in any game this season. pic.twitter.com/rsVe85ItNN

Mahomes out there doing everything he can pic.twitter.com/53SBrqYdV5

Brady now trails only Michael Jordan for the number of championship MVPs.

Tom Brady's 5th Super Bowl MVP extends his own record and breaks a tie with LeBron James for 2nd-most championship round MVPs in NFL/NBA/MLB/NHL history.

He trails only Michael Jordan (6). pic.twitter.com/erGdmSyBZQ

Tom Brady won a title, had 3 road wins, and threw 10 touchdown passes in one postseason in Tampa.

That either matches or exceeds what Tampa did in their first 44 seasons in franchise history, in each category. pic.twitter.com/EzEAN583Pq

So the debate over whether or not Tom Brady is the G.O.A.T. has been over for a long time. There’s no debate. He’s the single greatest quarterback in NFL history. Look at this stat and let it sink in.

Tom Brady’s officially better than every NFL franchise in the league. He’s also the first player in NFL history to win multiple championships after turning 40.

‘To be the best, you need to beat the best’ and that’s exactly what Tom Brady and the Tampa Bay Buccaneers did in these playoffs. They ran through Drew Brees, Aaron Rodgers, and Patrick Mahomes.

Side note, if anyone out there knows where I can get a Buccaneers Creamsicle jersey printed with Brady or Gronk vs. the only one I see out there for sale that’s a throwback Mike Alstott? Don’t get me wrong, I love the A-Train. He was a legend. But I want to get something unique to mark this special time in my sports history.