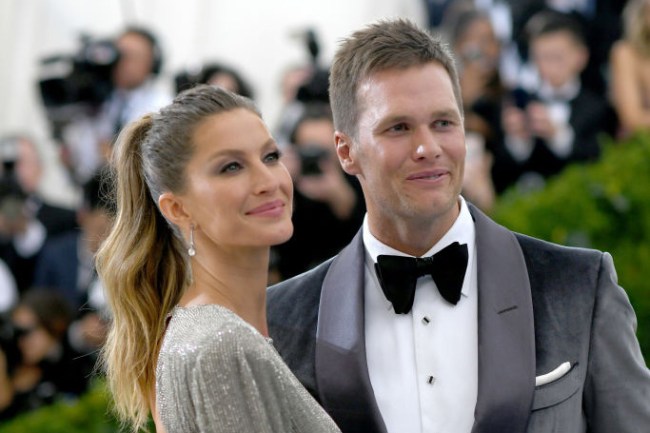 Today is Tom Brady’s 40th birthday, so first off, happy birthday to him. ESPN is celebrating Brady’s 40th birthday with a fantastic collection of behind-the-scenes stories about the legendary QB from former teammates, coaches, and confidants. One of the stories is how Brady destroyed the rest of the team in a drinking challenge, many of them way, way bigger than he is. Former New England Patriots quarterback Brian Hoyer told the tale of how Brady wrecked teammates in a beer-chugging contest.

“We played up at Buffalo and we couldn’t fly back into Boston because the weather was so bad, so we had to stay the night in Rochester. We drove there, and we all decided we’d go out to dinner together. Tom being who he was, he usually couldn’t come to a team event like that. We might be at Capital Grille and he is sneaking in the back door and then people realize he’s there and he has to leave. But this was impromptu at Dinosaur Bar-B-Que in Rochester. The whole team is there. And it turns into a beer-chugging contest. You have linemen, Julian Edelman, they all think they are going to win. Then someone says, ‘I heard Tom is really great at chugging a beer.’ We don’t usually get to experience him like this, but we finally coax him into doing it. He does it, and let me tell you, you couldn’t have poured out the beer faster into a glass. It was unbelievable. And he slams the mug on the table and puts both fists in the air. He walks away with a look on his face that said, ‘You really thought you were going to beat me on this?’ The place went nuts.”

We all know that Brady wins on the field, wins in life with his gorgeous wife, and he wins at chugging beer. The story was corroborated by former Patriots offensive lineman turned media personality Ross Tucker, who told Dan Patrick that when it comes to beer-chugging, Brady was the “best he’d ever seen.”

Tucker wrote about the beer-chugging story back in 2014:

We went to a local barbecue place near the stadium in Foxboro after practice one time, and there were two different occasions where Brady’s eyes displayed his trademark fire.

The first was when some of the veteran offensive linemen started talking to the rookies about a chugging contest. No big deal for these guys and given that they were fresh out of college, you would think they’d be at the top of their game. I was surprised to see Brady take part. The rookies looked at the seemingly pretty boy quarterback and laughed. I think I snickered myself.

Not only is Brady the five-time Super Bowl champion, but he is also a hall of fame beer-chugger.