Tom Brady Blasts ESPN Story About Patriots’ Dysfunction, Strongly Disputes Pretty Much All Of It 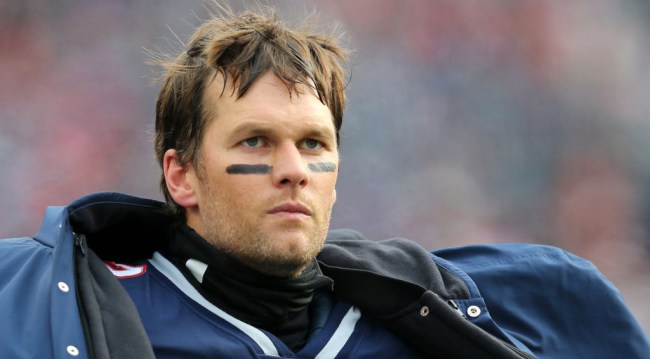 Last week the big news in the NFL was a story ESPN ran written by Seth Wickersham in which he details some major dysfunction taking place within the New England Patriots organization. The main targets of the article were the Patriots’ big three: owner Robert Kraft, coach Bill Belichick and quarterback Tom Brady.

Wickersham discussed, among many things, the power struggles between Belichick and Kraft, as well as Brady and Belichick. Kraft and Belichick have since responded, disputing the idea that there is any trouble brewing in New England.

On Monday, Belichick was asked about the story and called it “random” and “baseless,” according to WEEI. He also said he hadn’t read the article, so…?

For his part, in an interview with Sports Illustrated, Kraft said parts of the ESPN story were “a total fabrication and fiction.” Kraft also firmly believes that Belichick will still be the coach of the team in 2018.

Tuesday morning, it was Tom Brady’s turn. Appearing on his weekly segment with WEEI’s “Kirk & Callahan Show,” Brady made it very clear that the ESPN report, which he, like Belichick, hasn’t read the entire thing, was filled with inaccuracies.

“Well, I think there’s a lot of things that are said,” Brady said. “I think you can go about your life, certainly here with this team, and try and do what I have always done for a long time and that’s be a good teammate, work as hard as I can to help the team win, and then somebody can write something to contradict that and it’s up to everybody to believe what they want to believe. I don’t put too much thought into it, really. I think I have a great relationship with my teammates, and if others don’t feel like they have a great relationship with me, that is one thing, but I try and do what I have always done and be the best teammate I can be. I don’t think that has ever really changed in my mind.”

As for him being bitter about not winning “Patriot of the Week” even once this year, Brady says it’s not true.

“No, I think things like that, I can’t imagine me ever saying that, or me talking about that,” he said. “It’s hard to even answer that question.”

Brady added: “I have won it plenty of times. Again, it’s hard to even answer that question. There’s really no basis for it. It’s hard to — I don’t know. I just shake my head.”

Then there was the story about how Jimmy Garoppolo was locked out of the TB12 Sports Therapy Center after injuring his shoulder last year.

“Again, it’s hard to even answer those questions,” he said. “It is so far from any truth that I know, or any characterization of my relationship with my teammates. I have never denied anybody anything in regards to TB12. I have always found it very flattering when teammates go there. Again, I think this speaks to someone whether it is the writer himself, or whoever he spoke to, what agenda they might have in painting some type of picture.

“I think Coach [Belichick] always says speak for yourselves and I have always tried to go by that. Like I said, I have a great relationship with all my teammates. I certainly did with Jimmy. I loved working with Jimmy. We had a great time together. I wish him nothing but the best, like always. Just like all my teammates, really. I think that is just how I feel about him.”

So was Brady really feeling “liberated” when Garoppolo got traded, as was reported by ESPN?

“I think that is such a poor characterization,” Brady said. “In 18 years I have never celebrated when someone has been traded, been cut. I would say that is disappointing to hear that someone would express that, or a writer would express that because it is so far from what my beliefs are about my teammates and I think I am very empathetic about other people’s experiences. I know those situations aren’t easy.

“I have never been traded or released, but I can imagine how that might feel. I would never feel that way when Jimmy got traded, or Jacoby [Brissett] got traded. I have kept in touch with all those guys. When Matt Cassel was gone — all these guys I’ve worked with. I feel like I have had such great relationships with all the quarterbacks I have worked with. I have kept him touch with basically everybody. To characterize that as a certain way is just completely wrong.”

Brady also went on to discuss, and dispute, ESPN’s negative characterization of his personal trainer Alex Guerrero, his relationship with Belichick, and how he deals with stories that reflect badly on him or his team.

“It’s probably harder on the people who care about me because they are the ones that write me. They read it, probably like a lot of other people, you read it and when we grew up, what you read in the paper was the truth. I think now you just have to take everything — it’s just a little bit different now.”

Listen to the entire fascinating interview with Brady below…