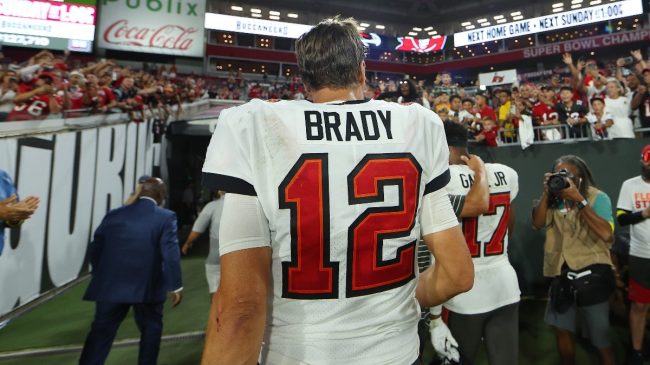 Everything seems to be stacking against Tom Brady right now. First, news dropped that he and Gisele Bündchen have each hired divorce lawyers. Now, it sounds like the Tampa Bay Buccaneers quarterback is dealing with an eye-opening injury.

According to Ian Rapoport and Sports Illustrated, the Bucs quarterback “is dealing with a minor rotator cuff injury.” Luckily, there is some good news, as it doesn’t seem to be serious. “The injury isn’t believed to limit him, and the quarterback will be able to play through it.”

However, considering Tom Brady is 45 years old, this doesn’t bode well for the 2022 season. Regardless, we should expect to see Brady on the field for the rest of the year as long as he doesn’t receive a more serious injury.

Although that’s good news for the Buccaneers, Tom Brady is in a bit of a rut right now. After he surprisingly unretired from the NFL, he and Gisele Bündchen have reportedly been on the rocks. Now, the Bucs quarterback appears to be in the middle of a divorce while potentially playing his final season in the league.

We’ve all seen Tom Brady play through adversity. He’s always found a way to take negative energy and use it as fuel for personal success. The future Hall of Fame quarterback is going to have to dig deep this season, as everything seems to be going against Brady right now.