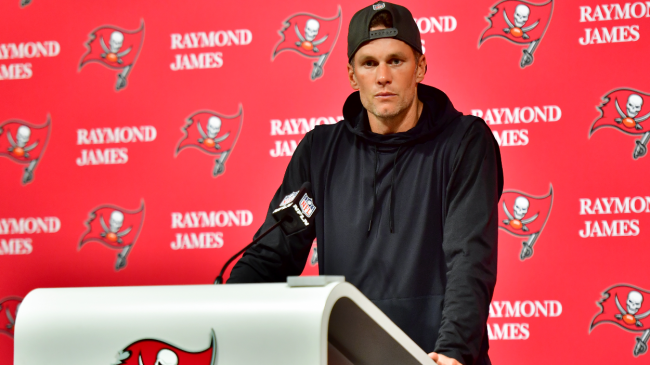 Tom Brady’s NFL future will be top of mind this offseason. The star quarterback’s status for 2023 is still up in the air.

Will he remain in Tampa? Will he find a new team? Will he hang up the cleats for good?

Anything is a possibility at this point in time.

There are 375 million reasons why he could retire and begin his broadcast career. But he’s already shown his passion for football outweighs just about everything else in his life.

The passer opted to spurn his brief retirement last offseason, which might’ve cost him his marriage. Unfortunately, his hopes of another strong season fell well short of expectation.

The Bucs went 8-9 in the regular season, with Tom Brady posting the first losing campaign of his career. Tampa Bay still slipped into the playoffs despite that poor record, but they were quickly dispatched by the Cowboys.

An opening round blowout ended the Bucs’ Super Bowl aspirations, forcing attention to turn to Brady’s future under center.

His postgame presser seemed to signal the end of his time in Tampa, which only made those talks heat up. Brady addressed the question once again in a recent episode of his podcast, Let’s Go!

Tom Brady on his future, via his podcast: pic.twitter.com/fFAq8HOS6d

The answer came in response to his co-host, Jim Gray, asking the quarterback about his plans for the future. It had many on social media reacting.

One person wrote, “Tom Brady seems agitated,” while another sarcastically said, “He seems like a nice guy.”

There’s no doubt he’ll be berated by these questions all offseason, though he’s in no hurry to make a decision. Brady plans to take some time away from the team before making up his mind.