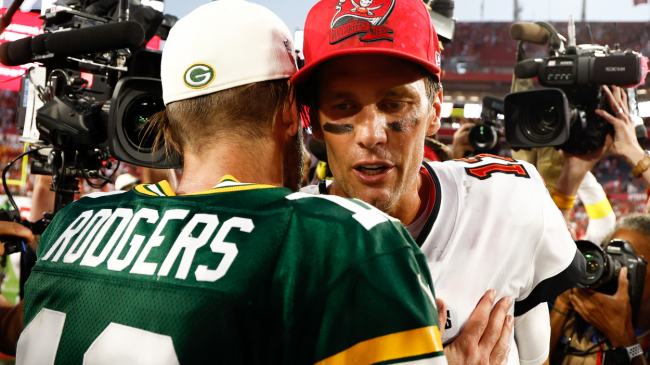 The NFL postseason is still heating up, but some fans are already thinking about the upcoming offseason. That’s because a pair of the league’s most acclaimed passers could be on the market.

Aaron Rodgers and Tom Brady have both seen their 2022 seasons come to an end, leading many to debate on where they’ll be playing next year. Luckily, some next team odds for both quarterbacks have already been released.

Bookies.com has issued their betting projections for both Brady and Rodgers. The teams at the top are a bit surprising.

We’ll start with Tom Brady, who might’ve just played his last game in Tampa. The future Hall of Famer led the franchise to a Super Bowl title in 2020, but things sputtered in his most recent campaign.

The Bucs went 8-9 but somehow still made the playoffs. Tampa Bay saw a swift exit from the postseason following a 31-14 loss to Dallas.

After that playoff loss, Brady seemed sentimental while addressing the media. Many speculate that his time with the team is through.

That theory is backed by these latest “next team” odds as the Bucs rank fifth on the list at +750, just above retirement (+800). Instead, a pair of former rivals lead the way, with his former team sitting close behind.

While the two teams at the top make sense, it would certainly be a sight to see Brady suiting up for the Raiders or Dolphins. He played in the same division as Miami for the first 20 years of his career, and we all know the Raiders’ disdain for the passer after the infamous “Tuck Rule” game.

But, hey, Brady’s since acknowledged that it might’ve been a fumble, and the Raiders will reportedly be on the QB market as they plan to part ways with Derek Carr.

As for Miami, they’ve pledged their allegiance to Tua Tagovailoa.

Obviously, a reunion with the Pats or Bucs can’t be ruled out given the history. San Francisco, Brady’s childhood team, comes in at the No. 3 spot.

And, of course, there’s always a chance of retirement seeing as he’s already locked up a massive TV deal with FOX.

Aaron Rodgers’ next team odds are a bit tamer.

The Packers star is expected to return to Green Bay, though there are a few competitors looming. A pair of those potential partners also rank high on Brady’s list.

It seems to be a three-team race between the Packers, 49ers, and Raiders. Rodgers played his college ball at Cal so a return to the West Coast could be in the cards, but many see him staying put.

Retirement is also an option, with his odds of hanging up the cleats actually being higher than Brady’s despite a six-year age gap.

The next team odds have many football fans on social media talking.

One Las Vegas fan said, “I’ll apologize for my Tom Brady hatred after he leads the Raiders to a playoff win.” Most would take that tradeoff.

Then there was A-Rod. A notable sports betting personality claims that “the 49ers make the most sense.” It would be hard to picture Rodgers in anything but green and gold.

It should be an exciting offseason on the quarterback market. Time will tell where these two end up.