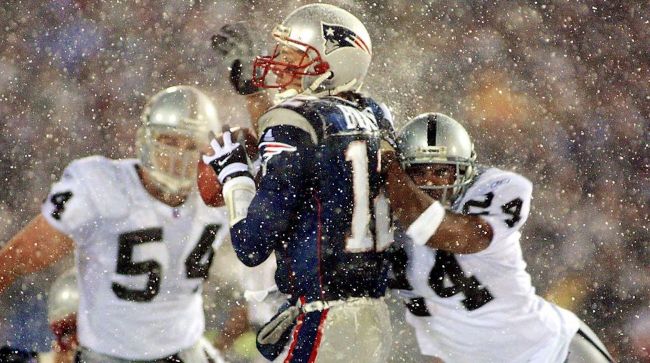 While Tom Brady’s legacy is undoubtedly the result of his own talent and determination, like all epic stories, the quarterback’s journey to becoming the greatest of all time has benefitted from some luck along the way.

As a New York Jets fan myself, I’m well aware of the fact that Brady’s career officially began after Jets linebacker Mo Lewis knocked then-Pats QB Drew Bledsoe out of the game with a crunching sideline tackle. As the saying goes, no one’s ever gotten anywhere worth going without occasionally being in the right place at the right time. Never heard that one before? That’s because I just made it up.

The point is, though, that this stroke of luck, this injury to Bledsoe, has since been characterized as the dawn of Brady’s legendary career in New England.

Then, a year after he made his debut, Brady had the second infamously lucky moment of his career en route to his first-ever Super Bowl title: the Tuck Rule game. Give how long it’s been (20-plus years!), here’s a quick refresher of the Tuck Rule game’s significance, via Wikipedia:

The 2001 AFC Divisional Playoff game between the New England Patriots and the Oakland Raiders, also known as the Tuck Rule Game at Foxboro Stadium in Foxborough, Massachusetts. The game, played under a heavy snowfall, was the last at Foxboro Stadium.

The name Tuck Rule Game originates from the controversial game-changing play. In the 4th quarter, Raiders’ cornerback Charles Woodson tackled Patriots’ quarterback Tom Brady, causing what initially appeared to be a fumble that was recovered by Raiders’ linebacker Greg Biekert. If the decision had remained a fumble, it would have almost certainly sealed the game for Oakland.

The following week, the Pats would beat the Steelers in Pittsburgh before heading to the Super Bowl and beating Kurt Warner’s Rams by a score of 20-17. Brady, of course, would then go on to win another five Super Bowls during his now-23-year-long NFL career.

Even Brady himself has acknowledged the significance of the Tuck Rule game, saying that he probably would’ve begun the following season as Bledsoe’s backup once again had the Patriots lost that game:

Now, more than 20 years since the famous postseason incident, Brady himself is even casually admitting that the play “might’ve” actually been a fumble:

Everyone keep this on the down low please. pic.twitter.com/xPtrg1kXjr

One can only imagine the other sliding-doors universe in which Brady lost possession of that snow-covered ball. Maybe the Jets are decent in that world. Hopefully. Probably not though. Jets suckage is multiversal.

RELATED: Tom Brady Fails Miserably While Trying To Speak German Ahead Of 2022 NFL Game In Munich