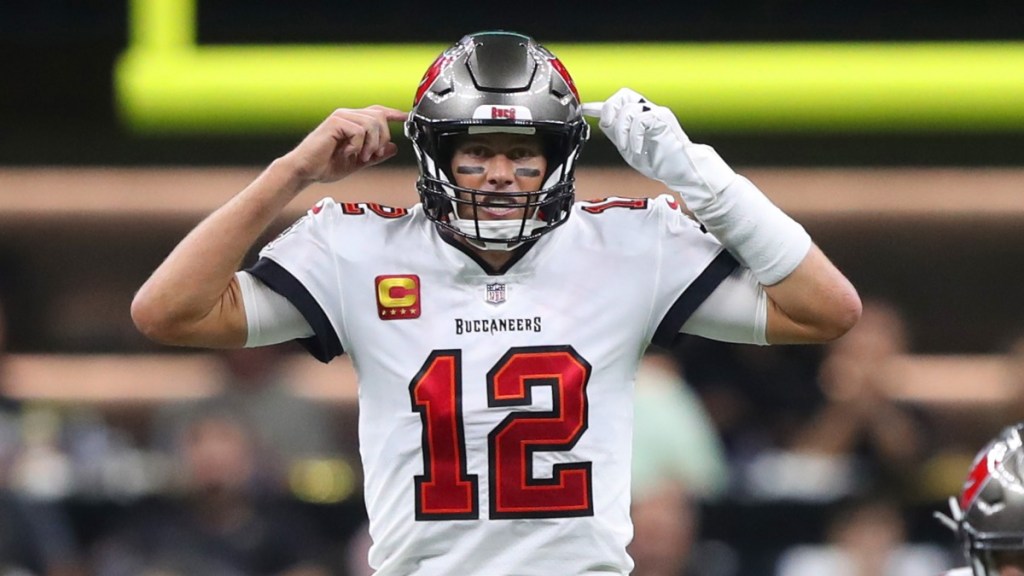 Tom Brady and the Tampa Bay Buccaneers are set to face Aaron Rodgers and the Green Bay Packers in Week 3. This will be the 5th time these two future NFL Hall of Famers will face each other and Tom holds the edge with a 3-1 record against Rodgers.

Comparing quarterbacks ahead of a game is tricky because it’s not as if a fired up Tom Brady is out there facing Aaron Rodgers. The quarterbacks are never on the field at the same time and they’re just trying to beat the other team’s defense. But there is bragging rights to be won and Tom will need some help this week due to a severely depleted offense.

During his Friday morning press conference with the Buccaneers media, Tom Brady was asked about ‘the situation at receiver’. He went on to explain how they’re dealing with 5 Buccaneers WRs listed on the Week 3 injury report and Mike Evans’ suspension.

Reporter: “You talk about the situation at receiver with guys coming and going and the uncertainty of who you are throwing to. Do you think that will be better on Sunday or is that just something you’re going to have to deal with?”

Tom Brady: “I think that part of the job is to deal with different people being in and it’s just part of the ‘Demolition Derby’ game that we play. Guys are in and out and you just gotta adjust within the game. And certain weeks you start a certain way and it doesn’t end the way that it started.”

“Guys get injured, y’know, look at the Dallas game. Mike went out. Chris went out. Julio went out. Donnie went out. You’re ending the game in a totally different place than you would’ve started. You put together the gameplan with those guys in there and you play to their strengths but you have to adjust throughout the game.”

“So sometimes when you know guys aren’t going to be out there during the week you can plan for it. Other times you have to adjust in the game. Every team deals with it, you know, we lost Mike in the 3rd quarter, in the 4th quarter they lost their corner, a lot of things change. You just gotta try to win the game however you can win it. And fortunately our defense is playing great football and we’ll do the best we can do on offense.”

Brady also spoke on letting his emotions ‘get the best of’ him when throwing the tablet.

When asked about the latest tablet-throwing incident, Brady talked about trying to keep his emotions in check.

“And you’re right, I think there’s a frustrating part for all of us when you get a little older and you expect it a certain way and it doesn’t go exactly the way you want. But that’s it, that’s the way it is, and I’ve got to do a good job as a leader to be at my best regardless of how I feel about a certain situation.”

“There’s a part of it for all of us that you want to be the best you can be, really not just for yourself but for everyone around you, for the whole team. Everyone’s counting on you to be a great player. We’ve got to reach a higher level on offense. That’s part of what our responsibility is.”

Honestly, we all should've know this was the answer. https://t.co/Tc99W1h1EY

You can go watch Tom Brady’s full press conference on the Buccaneers’ website if you want to see what else he had to say ahead to the Packers game!