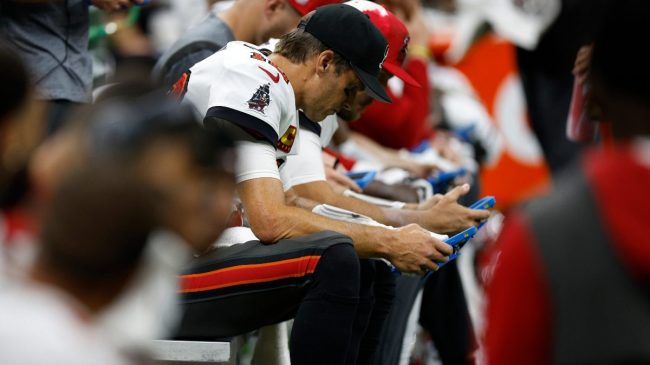 It was a frustrating day for Tom Brady and the Tampa Bay Buccaneers. However, they found a way to win late in the fourth quarter against the New Orleans Saints. Despite that, mid-way through the matchup, Brady was seen throwing a tablet as his emotions got the best of him. Now, he hilariously responds to the tablet toss.

The Buccaneers quarterback hit social media not long after the big win over the Saints. He’s clearly happy his team walked away with a victory as they prepare for Week 3. However, Tom Brady didn’t forget to mention the tablet he basically Gronk-Spiked into the ground in pure frustration.

Tablets are in danger anytime Tom Brady faces the Saints, apparently. The last time we saw him toss a tablet was last season when the Buccaneers ended up losing to New Orleans. Even so, Sunday’s spike looked much more aggressive than the first.

The Microsoft tablet might want to sit out the next Tom Brady plays the Saints. pic.twitter.com/l062fvG9aZ

Luckily, Tampa Bay currently sits 2-0 entering their next game. The Buccaneers haven’t looked all that great though, despite finding ways to win. Their offensive line is struggling so far and Brady has made some mistakes we don’t normally see him make.

We’ll see how the rest of the Buccaneers season plays out. As long as the wins keep rolling in, fans aren’t going to care how many tablets Brady breaks.