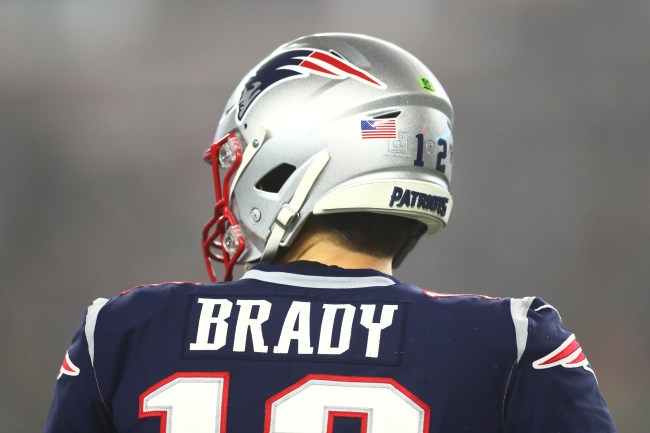 The entire region of New England (except for maybe Connecticut–pick a side, cowards) has not had a solid poop since Saturday night. There mere thought of picturing Tom Brady in a uniform other than red, white and blue is like picturing G.I. Joe in ISIS garb. Inconceivable.

New Englanders will likely have to suffer months of uncertainty and resort to over-reacting to Tom Brady’s signature way of speaking without actually saying anything.

Brady gave #PatsNation a bone to chew on in his latest Instagram post, in which he thanks his fans, lauds the organization, and hints about his motivation to make a stronger return.

I just wanted to say to all of our fans, THANK YOU! After a few days of reflection, I am so grateful and humbled by the unconditional support you have shown me the past two decades. Running out of that tunnel every week is a feeling that is hard to explain. I wish every season ended in a win, but that’s not the nature of sports (or life). Nobody plays to lose. But the reward for working hard is just that, the work!! I have been blessed to find a career I love, teammates who go to battle with me, an organization that believes in me, and fans who have been behind us every step of the way.

Every one of us that works at Gillette Stadium strived to do their best, spent themselves at a worthy cause, and prepared to fail while daring greatly (h/t Teddy Roosevelt). And for that, we’ve been rewarded with something that the scoreboard won’t show – the satisfaction of knowing we gave everything to each other in pursuit of a common goal. That is what TEAM is all about.

In both life and football, failure is inevitable. You dont always win. You can, however, learn from that failure, pick yourself up with great enthusiasm, and place yourself in the arena again.

And that’s right where you will find me. Because I know I still have more to prove.

At the time of this writing, the Instagram post went live an hour ago and already has nearly 575,000 likes and a shitload of support from public figures from all walks of life all over the world.

Venus Williams: You have Nothing to prove, but so much to give! Biggest fan. Rock on 🙌🏾💜🤸🏾‍♂️

David Beckham (who apparently had a toddler write this): Yes sir @tombrady football 🏈

Teammate Bejamin Watson: No bro. We all need to be thanking you! Your leadership is an inspiration, your example exemplary, and your fire is contagious. Generations of players have been blessed to take the field and share the locker room
with you. You made everyone better and made us appreciate this game all the more. You taught us the importance of TEAM and that winning is not by chance. It’s by choice, in every drill when the lights and cameras are no where to be seen. And even though your stardom is unmatched you still take time hug our kids, wives and parents, sign all the stuff people send you and have normal conversations lol. Kindness lasts forever. Play as long as you desire to. This decade needs some TB records as well. Fan for life #LFG

“I know I still have more to prove.” What does this mean, Tom? Pick up your phone. Let’s talk. I’m sweating bullets over here, man.