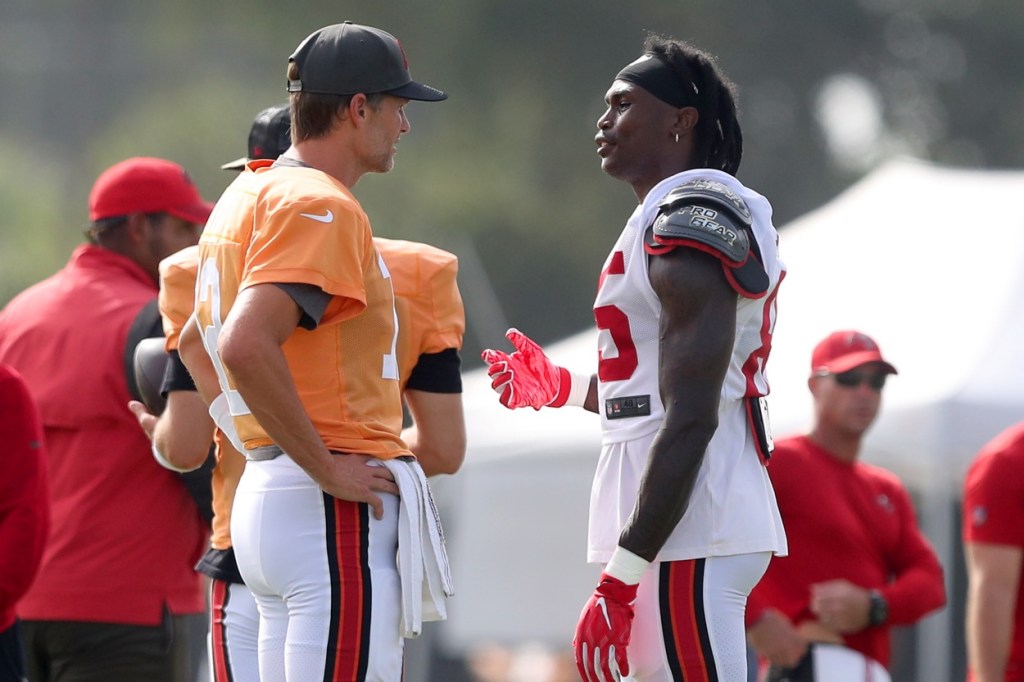 After nearly two weeks away from preseason training camp, Tom Brady returned to practice with the Tampa Bay Buccaneers on Monday. Fans couldn’t fire their jokes off fast enough after it was reported that Tampa Tom has returned to practice and his name was trending on Twitter within a few short minutes.

The rumors surrounding his whereabouts reached a fever pitch in the few days prior to Tom Brady’s return to practice. Fans were wholeheartedly convinced that the G.O.A.T. had left Buccaneers training camp to covertly compete on the reality TV competition show The Masked Singer.

Then over the weekend, details emerged that Tom Brady was likely just on vacation at an ultra-exclusive resort with his family. That story seems likely but it seems incredibly unlikely that Brady could be at any resort and news/pictures wouldn’t leak on Twitter. Alas, he’s back and Buccaneers nation is rejoicing.

ESPN’s Buccaneers reporter Jenna Laine reported on Monday morning that Brady was back:

Tom Brady is back in the building and is expected to practice today.

The Bucs practice at 12:45 today so that’s when we have our first look at Brady since his 11-day absence from the team.

Fans were quick to joke about Brady’s whereabouts and his triumphant return to a team that’s been severely depleted by injuries over the past few days in his absence.

Did he get voted off The Masked Singer? I guess people who watch that show will find out whenever it airs…

Just like that all is well in the world. 🐐🏴‍☠️

Imagine if reporters ‘broke news’ every time you showed up to work:

Area man shows up to work

On the one hand, it’s been wild how overblown the reports of him missing from camp have been. But on the other hand it has been incredibly strange to see the most high-profile player in the NFL disappear for 10 days during the middle of the NFL’s preseason.

Our long national nightmare is over.

As a born and raised Bucs fan myself, I never had any doubts he’d return.

Of course he's back. And will be laser focused on Dallas. All this noise to the contrary has really become tiresome. But I guess many in Buc Nation love all the drama. Relax, people. And let's get ready for some football.#GoBucs

The Buccaneers’ offensive line has gotten pretty beaten up in Tom Brady’s absence. It will be very interesting to see where things go from here and how the line looks in the Bucs’ next preseason game.

Can you imagine if this actually turned out to be true?! 🤯https://t.co/8jmFS0vyvB