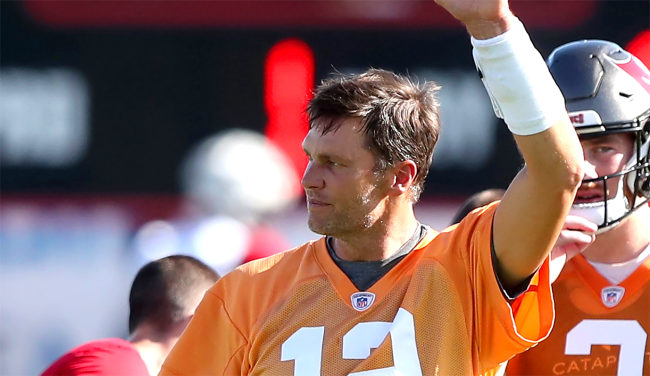 On Thursday, Tampa Bay Buccaneers fans were starting to feel a little panicky after new head coach Todd Bowles admitted that he doesn’t have a firm date for when Tom Brady will return to training camp.

The length of Brady’s absence is certainly cause for concern. He will be gone at least past the Bucs game versus the Titans on Saturday. Couple that with Tom’ radio silence – he hasn’t posted to his Instagram or Twitter pages this entire month or given any kind of statement about his absence – and it’s understandable why Buccaneers fans are worried.

Tampa Bay’s first regular season game is on Sept. 11 – 22 days from now – so it is very unusual for a team’s starting quarterback to miss almost two weeks of training camp in the lead up to the season. (Brady also missed several days of practice in the week prior to his extended leave.)

Brady’s absence reportedly doesn’t have anything to do with a health or family issue, and was also supposedly planned in advance, so what is so important that he needs to take so much time off with the NFL season so close to beginning?

One fan, fantasy football analyst Kendall Valenzuela, has a great theory that has got the internet wondering.

Where in the world is Tom Brady? We have a theory 🔍 pic.twitter.com/zUvopoaCwM

That’s it. Tom Brady is going to be a contestant on The Masked Singer. Mystery solved.

Well if some dude walks out on stage wearing a goat costume then it’s defo TB12! 🐐#GoBucs

Her theory was echoed on Reddit by a user who goes by the handle CANNONFIRE and tweeted his exact same theory at Valenzeula.

“I’m sure Brady and any other possible contestants would have been required to sign an NDA to be on the show,” he wrote. “It was also explained in those reports that the absence was known about and approved in advance by the team, which would also make sense. A casting/filming deal with a TV studio would have to be set up months in advance to align schedules, set the cast, etc. Brady could have agreed to be on the show back when he was briefly retired and then still had it as an obligation to be fulfilled upon rejoining the team. The leave of absence could have been a condition to him coming back.”

He continued, “In May 2022, Brady signed a 10 year, $375 million deal with Fox Sports to be their main NFL analyst once he retires. What channel does The Masked Singer air on? You guessed it, it airs on FOX. The same channel Brady will be calling NFL games on once he retires. If this wasn’t enough, a little Google search let me know that Joe Buck appeared on The Masked Singer in Season 7 while he was the main NFL Color Commentator for Fox Sports. So the precedent is there.”

“Next I decided to Google Masked Singer filming dates and came across a nifty little site where you can sign up sit in the audience for the filming of The Masked Singer. Lo and behold, right on the main page it shows that there is a filming session supposed to occur on August 20. That is the exact same date as the Bucs-Titans preseason game, you know, the one which Brady said he would definitely be out through. What a coincidence!”

On the same site mentioned above, you can see any of the previous filming dates. Those dates were July 24-29, August 2-9, and August 12-20. Well dern, the Bucs started training camp on July 27 and Brady was in attendance until August 10, so doesn’t seem likely that he was filming for the Masked Singer. That is until I did some more research and learned another interesting fact. Not all contestants are on every episode. Wikipedia let me know that in Season 7 (the most recent season) there were 15 contestants on the show. 5 appeared in the first three episodes, a different 5 appeared on the next three episodes, and the final five appeared on the next three episodes. The winner from each group moved on to a final round/episode. So it could be very likely that the July 24-29 and August 2-9 filming dates consisted of the first 10 contestants, and the August 12-20 filming sessions consisted of the final 5, which Brady could be apart of. Lets see how those last filming dates line up with Brady’s leave of absence. From the initial report, Brady missed practice on Thursday, August 11 and will be out until at least Saturday, August 20 (the Bucs Titans preseason game). The August 12-20 filming dates just so happen to fit perfectly into that leave of absence. Just a crazy coincidence I’m sure! One last comment that further fits my theory: the report today was that Bowles has “no definitive date” for Brady’s return other than that it would be after the Titans game. If Brady advanced out of his theoretical group of 5 contestants, he would need to film one more episode for the finale – but there’s no way to know up front if he would make it or not, leading to the “indefinite” return date.

The internet’s mind was blown…

“This is some f—ing GOATED internet sleuthing and peak offseason content. If this comes true you’re a f—ing legend, man,” one commenter wrote.

“Going to be the next sleuth they talk about in history books. Just like the guy who heard the trade go down on Xbox live,” someone else wrote.

“I’m just going to comment so I can say I was here,” wrote another.