Tom Brady’s Handwritten, Autographed (And Bloody?) Notes From Super Bowl 39 Are For Sale 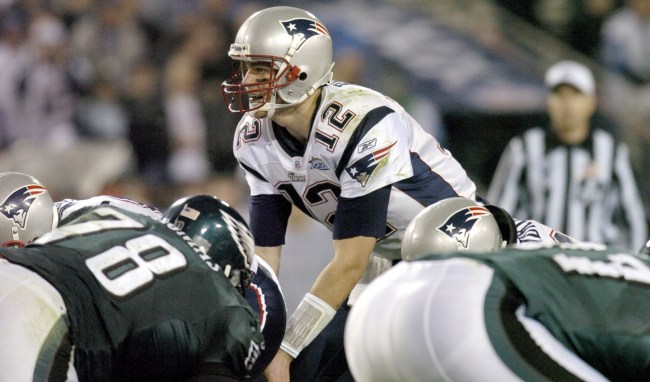 Listen. I am not a New England Patriots fan. Or a Tom Brady fan. In fact, I wish they would both just go away and let someone else have the spotlight for once.

But I am a big fan of interesting sports memorabilia, and even I have to admit this is pretty cool.

Currently up for auction over at Steiner Sports is Tom Brady’s personal, handwritten Super Bowl 39 notes.

Brady even autographed it, and, according to the listing, there appears to even be a bit of Tom Brady blood on it. TOM BRADY DNA, PEOPLE!

This handwritten note sheet recounts the Patriots 24-21 victory over the Philadelphia Eagles in Super Bowl XXXIX, the final game of the 2004 NFL season. On this 8 ½ x 11 inch sheet, Brady wrote down the result of each offensive play the Patriots ran and what offensive protection he calls out at the line of scrimmage. Each play is described in three columns, one for down and distance, one column for the play, and a final denoting the defensive front trotted out by Philadelphia defensive coordinator Jim Johnson. What makes this particularly of interest is that this play sheet could provide definite evidence that Tom Brady “Knew” what defensive form was coming next and perhaps was written down in order to track the formations of the Eagles defense and could be evidence from the “Spygate” investigation. Each of the 12 New England drives, with the exception of the final kneel down as time expired, is noted on this sheet. Thick blue and green lines separate each drive on the handwritten sheet. Brady meticulously wrote his notes on this sheet in blue pen. At the top of the sheet, below the three hole punches, Brady wrote the date, “Feb. 2005”, and his opponent, “Eagles”, in blue marker.

This handwritten page is in good condition, although there is a small water stain on the lower left corner and a smaller stain that near the top that slightly impinges upon the “Feb. 2005” inscription. There appears to be a small blood stain on the right side of the page, on both the front and back sides. This would be consistent given that Brady did have a cut on his right wrist that corresponds where he would have filled out lines 61 and 62. The sheet has been signed in blue pen and comes with a Authentication from TriStar for the signature and an LOA from James Spence Authentication for the Tom Brady handwritten plays.

Something else that may make this piece of Super Bowl memorabilia even more interesting is the fact that this was the only Super Bowl victory that Brady didn’t take home the game’s MVP award. That honor in 2005 went to Patriots’ wide receiver Deion Branch.