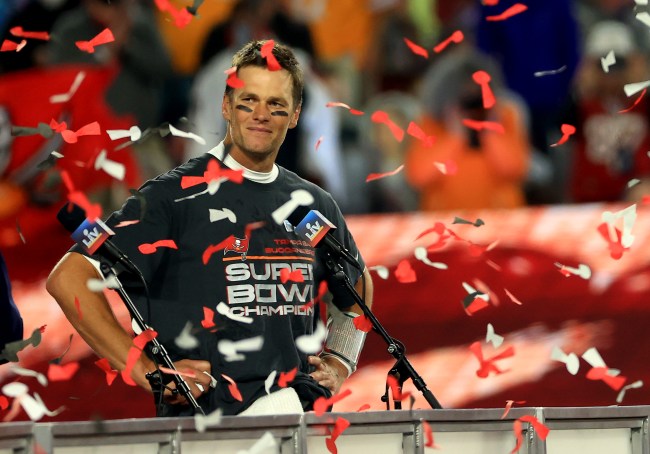 It’s been weeks since the Buccaneers dominated the Chiefs in the Super Bowl, but it’s still ridiculous to think that Tom Brady has now hoisted the Lombardi Trophy seven times. The man has been to 10 Super Bowls and has won seven of them, a 7-3 record in the big game will never not be an utterly shocking statistic.

It’s not just shocking for all of us that have witnessed the greatness over the years. Based on a quote from Gary Meyers’ book Brady vs. Manning, Brady himself didn’t see this many Super Bowl rings in his future.

“It’s not like you are going to win six or seven Super Bowls,” Brady said. “Why didn’t Michael Jordan win twelve championships? He won six. That’s still a tone. With how good the other players are, the level playing field, especially in the NHL in the salary-cap era, it’s hard to win.”

Brady’s quote here is essentially the exact opposite of LeBron James’ statement after signing with Miami when said the Heat were going to win ‘not five, not six, not seven’ championships.

Funny that you saw that now. Kind of jumps off the page. Tom had three titles when he said that to me. I talked about that line in one of the final episodes of The GOAT podcast. https://t.co/HfD5B52vrf

Brady vs. Manning was released in 2016, but Brady offered Meyers that quote in 2015 when he had three Super Bowls under his belt.

Brady was already a sure thing Hall of Famer at that point and entering the greatest quarterback of all-time discussions, but most would probably agree with Brady’s statement that winning six or seven was probably impossible. Maybe he could get a couple more rings, but six or seven was a giant number, especially for a quarterback already in his late 30’s.

Everything fell into place, however, and the rest is history. Brady is the proud owner of seven Super Bowl rings and undoubtedly the greatest quarterback of all-time.