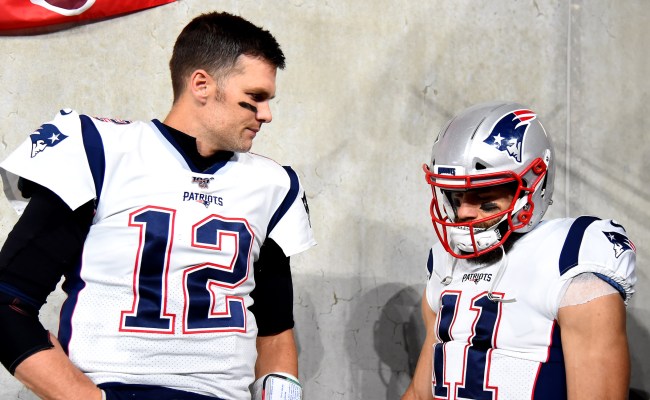 In case you missed it, New England Patriots wide receiver Julian Edelman was arrested on Saturday in Beverly Hills for allegedly jumping on the hood of someone’s Mercedes-Benz.

According to TMZ, law enforcement said at around 9 pm on Saturday night officers were in the area working on a robbery case when someone flagged them down to let them know that the 33-year-old NFL star was seen jumping on the hood of a stranger’s car.

Pretty impressive maneuver for a guy who reportedly needs surgery on his left knee this offseason.

They also told TMZ that “it was apparent to them Julian had been drinking.” Shocker.

Edelman had been out to dinner earlier in the night at Cantina FRIDA with former New England Patriots teammate Danny Amendola and Boston Celtics legend Paul Pierce.

Edelman was charged with misdemeanor vandalism and released.

On Tuesday, Edelman’s BFF Tom Brady was doing some promotion for his line of TB12 snake oil products with an Instagram story when he decided to sideswipe his little buddy over his arrest.

As he displayed a bottle of his TB12 Electrolytes, Brady wrote, “@edelman11 it sounds like you need some of this.”

Nothing like busting a bro’s balls in front of your 7 million Instagram followers to show you’re a true friend.

Also, why is Brady wearing only one sock?