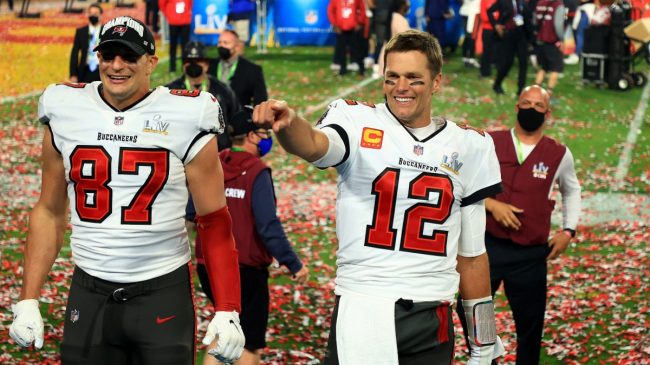 Tom Brady is making waves with his latest tweet.

The NFL star was promoting his Brady Brand clothing line which led to a racy post. The topic of the promotion was for the company’s new underwear line.

Brady already made some headlines during the launch of the undergarments, with his wife, Gisele, posting a video of the QB modeling the line. Now, he’s taking it a step further.

40k likes and I’ll recreate these photos. Unrelated but can you guys send me some more of the socks @bradybrand 🤝 🤝 https://t.co/ANFE3Ez7Cd

Brady says that if his post gets 40K likes, he’ll recreate the photos shown in the promo. He then quips, “Unrelated, but can you guys send me some more of those socks,” tagging Brady Brand.

Of course, the hilarious post got people talking on social media. Many immediately thought of the same NFL Combine photo and quickly posted it in the comments.

Check out the reaction.

Others chimed in with hilarious reactions of their own, joining in on the fun.

How hard is it to make 40k burner accounts?

Even the Brady Brand joined in. They’ll send those socks for… um… unrelated purposes.

My mind went straight to Seinfeld, as did a few others.

We’ll see if the post does in fact get to 40K likes. Brady has the offseason to promote his brand before getting back to the gridiron for the 2022 campaign.

He’ll look to get the Bucs back to the Super Bowl after coming up a game short last year.