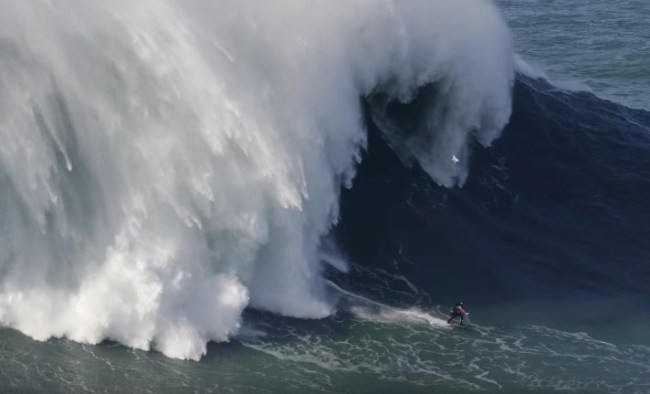 British surfer Tom Butler just rode his way into the record books by riding a wave that’s believed to be 100-feet tall. This all went down in the tiny Portuguese fishing village of Nazaré, a town located about halfway between Lisbon and Porto.

In a few short years, Nazaré went from being relatively unknown in the sports world to becoming the #1 big wave surfing destination on the planet. Each year, from about mid-November through January, Nazaré gets pounded with epic swells that produce the largest surfable waves found anywhere on the planet.

I’ve never been to Nazaré myself but I had lunch last January like 50 miles down the coast in a national preserve/park during one of these epic swells and even there it was the largest waves I’d ever seen in my life. One of the coolest things about Nazaré is how close the waves break to the shore. Onlookers can literally stand on the seawall onshore and watch as the world’s best big wave surfers ride skyscraper-sized waves. 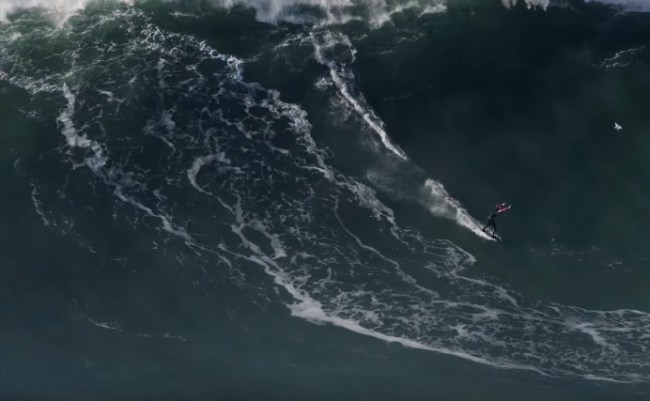 American surfer Garrett McNamara set a world record at Nazaré back in 2011 by riding a 78-foot wave. That record was broken by Brazil’s Rodrigo Koxa who rode an 80-foot wave last year. Now, British surfer Tom Butler appears to have smashed those records by 20-feet. The wave itself hasn’t been officially measured yet, that’s to come later.

Tom spoke with Cornwall Live and said riding this wave was like ”running away from a raging bull”.

Tom said: “It’s the biggest wave surfed in the world this season and could beat the current big wave world record.
“When I was going down I thought, ‘holy f**k, this is the fastest I’ve ever been’. Time kind of slows down, it’s instinct really. I was doing everything to hold my balance.

“That’s when you’re training comes in – I do lots of gymnastics training to help me keep balanced.
“It’s hard to say exactly how big it was, I’d say it was 20 times my height and I’m 6ft2. You don’t really see it behind you because you’re so concentrated on what’s ahead of you.

This wave was ridden last Friday at Nazaré but it will have to be certified. In order to do so, they’ll somehow have to measure the height of the wave which the surfing community has gotten pretty good at but it’s still not an exact science yet.

He’ll now submit evidence of this wave to the World Surf League (WSL) who run the Big Wave Awards in April. If all goes as planned, Tom will win the XXL Big Wave award for riding the biggest wave of the year and he’ll have a new world record for the biggest wave ever ridden.