Leonard Fournette Was Fined $99k By Tom Coughlin For Doing The Unthinkable: Sitting On The Bench While Inactive 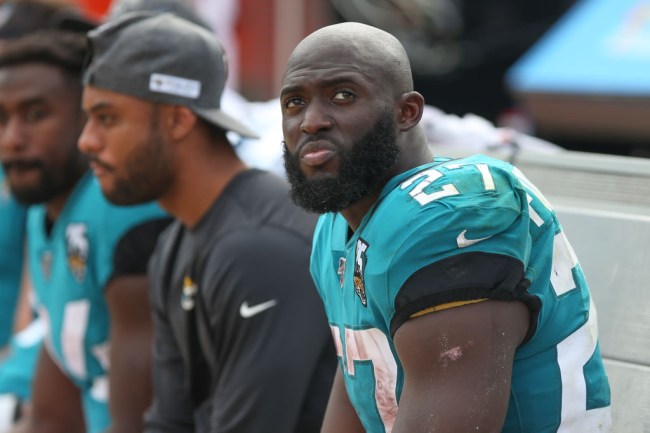 Something isn’t quite right within the Jacksonville Jaguars organization. It was recently revealed in an NFLPA report that over 25% of all filed grievances since 2017 have come via the Jags, which is a rather alarming number.

Tom Coughlin was hired in January of 2017 and it’s no secret that he’s a bit of an old-school, no bullshit kind of guy, to put things lightly.

Coughlin being strict is no new revelation, but this latest story involving running back Leonard Fournette is flat-out crazy.

While meeting with reporters on Wednesday, the former LSU standout revealed that he won a grievance against the team to get a $99,000 fine rescinded that was handed down by Coughlin. Why was he fined, you ask?

Get ready for this one.

He sat on the bench, while inactive nonetheless, during the team’s 2018 season finale in Houston against the Texans.

RB Leonard Fournette confirms he won a grievance against Jaguars to get a $99K fine rescinded. Tom Coughlin fined Fournette for his actions (sitting on the bench while inactive) during the 2018 season finale

This sounds like some scene from some horrible teenage football movie or something where one of the star players gets suspended or something for smoking a cigarette on school grounds. But for Fournette, sitting on the bench during a game he wasn’t even playing in nearly cost him $100,000.

Jaguars defensive back A.J. Bouye was asked about the situation involving all of the fines as well and didn’t hold back.

“In the offseason, you have players from other leagues, they come and ask me about the fines, like, ‘is it true y’all getting fined for stuff like this?’ Bouye said according to the NFL. “They laugh at us because they think that I’m lying. Now that stuff like this is coming out, it’s true, we got fined for it.

Maybe we’ll fix it ahead of time, but one thing I can say: We get fined here, we learn from it and we try to avoid it from here on out.”

Things seem to be going oh so well in Jacksonville. If the higher-ups can’t read the writing on the wall when it comes to getting rid of Coughlin at this point, I’m not sure they ever will.