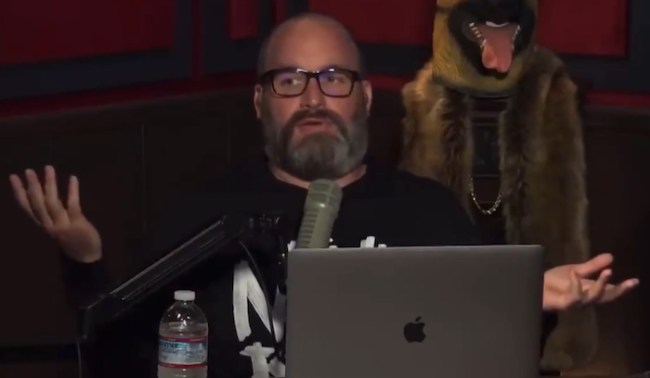 Comedians want to piss people off. It’s as much a part of their job as making people laugh.

Comedian Tom Segura is pissing off wrestling fans, and those fans – and few wrestlers – are firing right back.

Segura and his wife, comedian Christina Pazsitzky, took aim at fans of professional wrestling on a recent episode of their Your Mom’s House podcast.

Here’s Segura’s take on the people who love professional wrestling.

“So many guys that love wrestling. I think wrestling fans are fucking retards,” laughed Segura.

“But so many people like it. It’s the stupidest shit, and I think you’re the stupidest fucking tool if you’re like ‘hey man it’s not fake’, it’s fucking fake, and you’re a fucking idiot. They’re not real fights. These are just stunt people, and the fact that guys are like ‘man did you see The Undertaker reactions’, I’m like what?”

Tom Segura is really going in on wrestling fans. pic.twitter.com/D5OdyM03yK

When his wife retold the story of attending a live WWE event with a friend, Segura replied, “it’s pathetic. You’re a pathetic person.”

His wife admitted the show was fun, but before she could finish, Segura added, “yeah, so is the special Olympics. It’s a fun thing to go to, but it’s not real, it’s not a real competition.”

Segura isn’t saying anything that wrestling fans haven’t heard over the last hundred years. True wrestling fans know the outcome of the matches is predetermined.

Anyone who thinks wrestling is real probably also thinks ketchup should go on a hot dog.

Segura got what he wanted, a reaction, with more people checking out his podcast. Some of those people include wrestling stars like TNA World Champion, Moose.

Hey @tomsegura I’m the TNA HEAVYWEIGHT CHAMPION. And I will also beat your ass in under a minute. BOTH STATEMENTS are very REAL. https://t.co/4PjlddBY1l

Segura then sarcastically backtracked and claimed he understood why people love wrestling.

A lot of people don't get it. I LOVE wrestling! pic.twitter.com/hty90db68g

“Look, I’d like to apologize to all the wrestling fans out there who were insulted by what I said,” Segura said. “You’re not retarded. The people who believe the earth is flat are dumber than you. If we were just wiping out huge chunks of the population like I believe in, I would say flat earthers, let them go first.” After that, it was anti-vaxxers followed by wrestling fans third.”

I like wrestling. It’s not real. I’ve known this fact since grade school but I still watch professional wrestling.