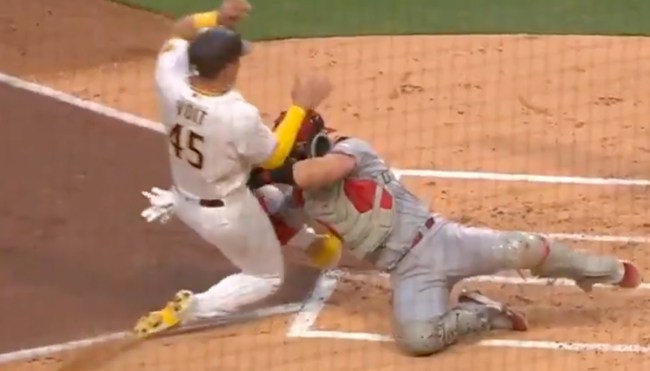 The 1970 MLB All-Star Game took place more than three decades before the league experimented with upping the stakes by giving whatever team went on to represent the winner of the showdown in the World Series home-field advantage. As a result, there wasn’t a ton of incentive for players to go particularly hard in pursuit of a win.

However, that didn’t stop Pete Rose from absolutely demolishing Ray Fosse at the plate in a successful bid to score the walk-off run, which separated the catcher’s shoulder in the process.

Following that incident, a number of lower-level leagues would institute rules designed to promote player safety and discourage those kinds of collisions. However, the MLB wouldn’t implement any serious changes until after Buster Posey was carried off the field after succumbing to what turned out to be a season-ending ankle injury in 2011.

As a result, it’s fairly rare to see those kinds of plays in the big leagues these days, which has naturally led to a decrease in the number of teams who end up seeking some sort of retribution when their catcher is on the receiving end of a major blow.

However, we’ve got some drama brewing courtesy of what unfolded during Tuesday night’s game between the Reds and the Padres.

Luke Voit was on first base for San Diego in the bottom of the first inning when Jurickson Profar ripped a line drive into the left-field corner to give his teammate a chance to score. While the Reds were able to get the ball to Tyler Stephenson in time to record the out, Voit collided with his head while sliding into the plate and the catcher was knocked out of the game with a concussion.

As an impartial observer, it doesn’t seem like Voit had any ill intent, but it’s very safe to say the Reds didn’t feel the same way. Based on what we heard after the game, no one was more irate than Cincinnati outfielder Tommy Pham, who informed Voit he knows a guy with a gym in San Diego who’d be more than happy to allow them to hash out their differences with some good, old-fashioned physical combat.

Tommy Pham on Luke Voit's slide into Tyler Stephenson: " If Luke wants to settle it, I get down really well. Anything. Muay Thai, whatever. Like I said, I've got an owner here who will let me use his facility. So fuck 'em. I'm out."

For what it’s worth, Stephenson doesn’t seem too shook up about things.

Only thing that matters is he was out https://t.co/tyJH3QWAYx