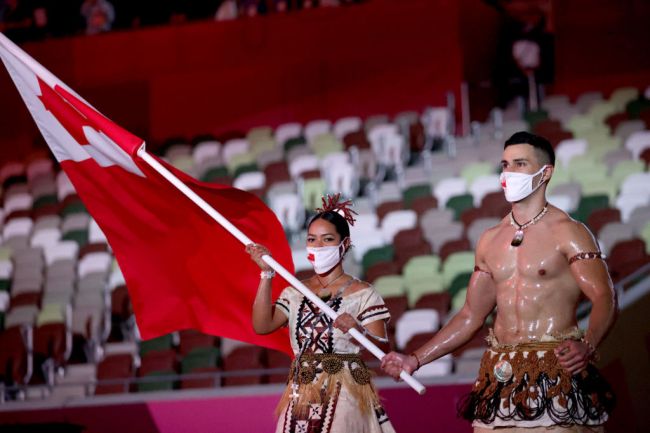 Pita Taufatofua was back at the Olympics on Friday and he was still not wearing a shirt. The 37-year-old Tongan carried his country’s flag for the third-straight Olympics and he was more oiled up than ever.

People have called Taufatofua the “Usain Bolt of flag bearers” because of his resounding fame that has come about over the past six years. As an engineer by trade, he is also a UNICEF ambassador for his country.

However, his stardom comes from his two-sport athletic abilities. Taufatofua has been a part of the last three Olympics in Rio, PyeongChang and now Tokyo.

While his Taufatofua’s Olympic career has been impressive, he is known best for his shirtless ceremonies. He first appeared as Tonga’s flag bearer in the Parade of Nations at the Rio games.

During the parade, he wore nothing but a ta’ovala— a traditional Tongan mat wrapped around the waist. His face and torso was noticeably shiny and people initially thought that he was very sweaty in the Brazilian heat.

It quickly became apparent that he had applied copious amounts of oil to himself. The internet lost its mind.

He returned in 2018 and was slightly more oily. Three years later, on Friday, he was even more oily than the two Games prior. It’s an absurd amount of oil.

This year was different. Taufatofua had competition.

Vanuatu is a small oceanic island country with a population of 299,882. It sits off of the north-eastern coast of Australia and has been sending athletes to the Summer Olympics since 1988.

This year, three athletes are representing the nation in Tokyo. Riilio Rii will be competing in the rowing competition and has hopes of becoming the first athlete from his country to win a medal.

He was selected as the flag bearer for the Parade of Nations and stole Taufatofua’s flow. Rii led his delegation wearing only a traditional Vanuatuan wrap.

Vanuatu saw the Tongan guy and was like "…aight, bet" 😂 #Olympics #OpeningCeremony pic.twitter.com/ayi16WRj6q

The only way that this can be settled is with a fight to the death in an Olympic pool full of baby oil. Thems the rules.