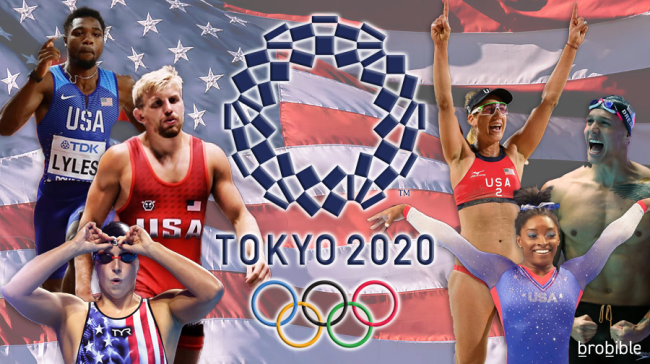 The Tokyo 2020 Olympics have arrived! After an unprecedented pandemic delay, the summer games are finally underway from Japan’s capital city.

As the next two weeks determine the most athletically-superior country in the world, there are quite a few Americans with medal hopes. Simone Biles and Katie Ledecky are among the household names for Team USA and are set to be the face of the Olympics.

However, the United States of America has a group of athletes that are in contention to bring home the hardware. Here are the top names to watch in Tokyo:

After taking home four gold medals and a silver medal in 2016, Ledecky is the headliner in American swimming. You already know that.

The sprint-event specialist has potential to be the biggest stars in Tokyo. He was on two winning relay teams in 2016, but his breakout came a few years later. Dressel took home five gold medals at the 2019 World Championships and will be a medal contender, if not the favorite, in each of his swims.

Manuel became the first African American woman to win swimming gold in an individual event during the 2016 games. She failed to qualify for the 100-meter freestyle this year, but will compete in the 50-meter freestyle in Tokyo. The 24-year-old won silver in the event in 2016.

At only 15 years old, Grimes will make her Olympic debut in the same event that Ledecky did so as a 15-year-old. She is the second-youngest swimmer to make the U.S. Olympic team and a podium finish is not out of the question.

After earning the silver medal in the 400-meter individual medley in 2016, Kalisz struggled in 2019. He was dealing with a shoulder injury and could not find his form. The additional COVID-delayed year allowed the 27-year-old to recover and get back to full strength. As the mentee of Michael Phelps, he hopes to be on the podium in both of his medley events.

The 400-meter hurdle event is the most anticipated field at this summer’s Olympics. U.S. teammates McLaughlin and Muhammad have a good chance of standing atop the podium together. McLaughlin broke Muhammad’s world record at the Trials and became the only woman in history to run the event in under 52 seconds.

Much like the women’s event, the 400-meter hurdles is expected to be crazy on the men’s side. Benjamin, who posted the second-fastest time in history at the U.S. Trials, will face Norway’s Karsten Warholm, who set the world record five days later. The two are expected to compete for the top spot and it’s a coin flip as to who will cross the line first.

With Usain Bolt not competing in the Games this year, the 200-meter field is wide open. Lyles is making his Olympic debut and is the reigning World Champion in the event. He is expected to podium, but anything less than gold would be disappointing.

Felix is a nine-time Olympic medalist making one last Olympic appearance. This is her fifth Games, but her first as a mother. She is firmly in the mix to reach the podium and earning one medal would tie Carl Lewis’ record for most Olympic medals by an American track and field athlete.

Crouser absolutely demolished the world record at the Trials last month. Can he beat himself? Will he continue his world dominance? Gold is the expectation for the 28-year-old.

Claye is a gold medal contender in the triple jump. Learn everything you need to know about his journey and music career in our BroBible exclusive profile. LINK HERE!

The face of the U.S. Olympic team this summer, Biles has been penalized all year for being too good. She will be expected to take home the gold again in Tokyo and may or may not attempt a stunt that is literally named after herself.

18-year-old Lee finished second to Biles at the Trials. Her four-event total on Day 2 was higher than the reigning gold medalist, which marked the first time that any gymnast had topped Biles in more than eight years. Her bar routine is one of the most difficult in the world and puts her in gold medal contention in the event.

On the men’s side, Malone is a two-time NCAA all-around champion. His bar routine makes him a medal contender in Tokyo.

30-year-old Kyle Dake is competing in what is likely his last Games. He is the reigning, two-time world champion in the 79kg weight class. However, that class is not contested at the Olympics. He moved up to 86kg and lost to the eventual bronze medalist in 2016. This year, Dake moved down to 74kg and will look for his first-ever medal.

Everybody loves when an athlete is trying to round out his legacy with an Olympic gold. Ellison is well-decorated in every international competition but does not have a gold at the Games. He won silver twice in team competition and bronze in the 2016 individual event. Is this the year?

Surfing is making its Olympic debut in Tokyo. 28-year-old Florence is a two-time world champion and one of the best aerialists in the world. He is a gold medal contender, and if everything lines up, he might try the extremely rare backflip in competition.

Skateboarding is also making its Olympic debut this summer and Huston is the favorite. He is the most successful street skater in history with 12 X-Games gold medals and enters Tokyo ranked No. 1. It’s gold or bust for the 26-year-old Huston.

April Ross is another athlete looking to round out her career with an Olympic gold. She and her partner finished second to Misty May-Treanor and Kerri Walsh Jennings in 2012, and when May-Treanor retired, she partnered with Walsh Jennings for bronze in 2016.

Ross is the best player in the world right now and competes with Olympic rookie Alix Klineman. Klineman is relatively new to the sand game, but she was a dominant indoor player and has adjusted extremely well to the beach. Missing out on a medal would be heart-breaking, and finishing short of gold would be dissapointing.

Softball and baseball are back at the Olympics for the first time since 2008. The United States is a gold medal contender in softball and 38-year-old Osterman is big factor. She helped lead the U.S. to gold in 2004 before going out with a bad taste in 2008. Osterman came out of retirement for the Tokyo Games and wants to rewrite her finish.