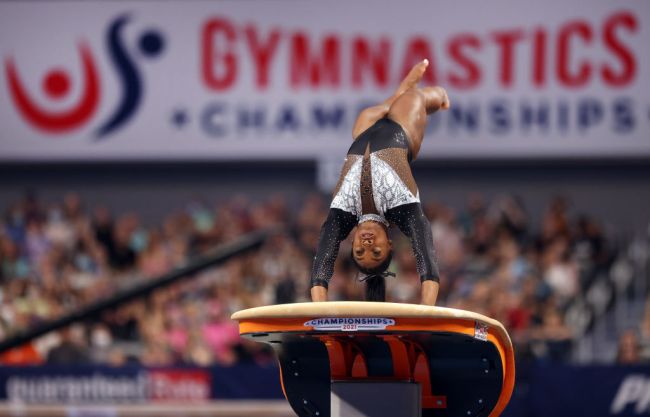 If there is one thing that every single person in the United States can agree on, it is that Simone Biles is the GOAT. In fact, everyone in the world must agree because it is fact. She is the most decorated American gymnast of all-time and the third-most decorated gymnast in the world with 30 medals. Belarus’ Vitaly Scherbo has 33 medals and Russia’s Larisa Latynina has 32. If you want to call them the GOATs for now, fine. But you’re wrong and Biles is out to prove it.

At the U.S. Gymnastic Championships over the weekend, she declared it so, wearing an embroidered goat on the shoulder of her leotard.

Be humble? For what? Facts are facts. pic.twitter.com/6gaJkyXqnZ

And it was not the first time that she did it either. In May, she wore a leotard with a much larger goat on her back. The message was loud and clear.

While she isn’t afraid to talk about how great she is, the judges are. At that same meet, Biles’ vault was so difficult that no female had ever tried it. Because of the danger, and the fact that it would set a bar too high for other competitors to beat, they gave her a low score.

Despite the penalization, Biles pushed forward at the U.S. Gym Champs. She didn’t even think twice about doing something within the box. For starters, her floor routine was remarkable. She did a ‘Tokyo Drift’ inspired floor routine that came just 10 days before the film’s 15th anniversary.

Simone Biles did a ‘Tokyo Drift’ floor routine at #USGymChamps and it rules! pic.twitter.com/3X3r6XFKQY

During the routine, she broke out a stunt called the “Simone Biles.” The move is called that because no one has ever done it before. It’s hers. Legendary.

“It’s never been done before. And it’s called, ‘The Biles.’” pic.twitter.com/5uoyYQPzWB

Biles continued on to take home her record seventh national women’s all-around title with a score of 119.650. She won by 4.7 points over runner-up Sunisa Lee in Forth Worth, Texas.

The 28-year-old will be the linchpin of the USA Women’s Gymnastics team, and the USA as a whole this summer. Expectations for her to perform are high, but she has a chance to become the undisputed GOAT (even though she is already) and it’s hard to imagine that she will squander it.

Here is the rest of her all-around performance from the US Gym Champs. It’s all insane.

And THAT'S how you do it.@Simone_Biles starts off the night with a spectacular routine on beam. #USGymChamps pic.twitter.com/FnsJzN0mTW

"To be a mentor for them has meant everything for me and to share these accomplishments and these goals."@Simone_Biles on sharing this experience with her teammates. #USGymChamps @OnHerTurf pic.twitter.com/Zds0QPWIen