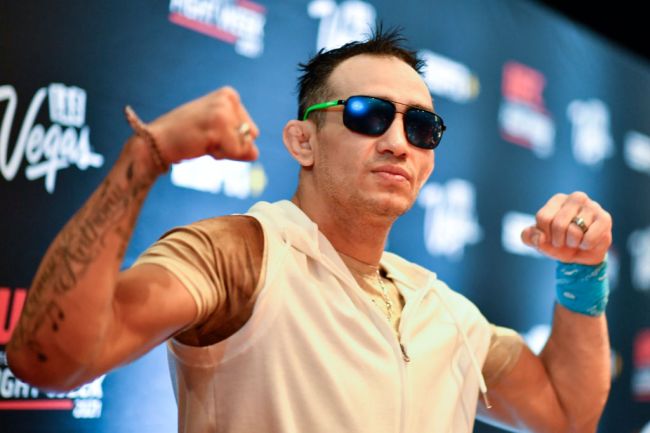 Over the past couple of years, Tony Ferguson has become known more for his whacky person outside the cage than he is for his accomplishments inside of it. His wild training videos, including that time he was kicking metal a metal pole during trainman, have become legendary among MMA fans.

Today, his whacky persona took center stage at UFC 274 media day. Ferguson went on a rant about fighter pay, Dana White, and the restrictiveness of a UFC contract during the press conference.

Tony says MMA fighters are underpaid. He says he asked Dana if he could box and Dana said no #UFC274

Here is the full 8:27 video of Ferguson’s rant if you’d like to hear his thoughts in their entirety:

"You should ask some of the other fighters that have been f*cking treated like sh*t for a long time too. I'm not the only one thinking it."

While Ferguson’s rant may sound a little bit wild, there might not be a fighter in the UFC who has more reason to be upset with the organization than Tony Ferguson. El Cucuy went on a 12 fight win steak from 2013 to 2019 and even won the interim Lightweight belt.

Unfortunately, Ferguson was stripped of that belt after suffering an injury so Khabib Nurmagomedov could win the vacant Lightweight title. This was in spite of the fact that the interim title was only necessary in the first place because of Khabib pulling out of a fight.

Ferguson never wound up fighting for the belt, falling short in a second interim title fight. Never getting to fight for the actual belt was likely a bit costly for Ferguson.

Some people may look at the million dollars he made between his two interim title fights and the 11 fight night bonuses he has received and think Ferguson doesn’t have anything to complain about on this subject. That’s simply not true though.

Ferguson was once viewed as the number one contender in the Lightweight division and a top 20 fighter in the organization. In any other sport, a top 20 player making less than $1 million dollars in a year at their peak would be seen as ridiculous.

Tony Ferguson is just one example of the many issues with fighter pay and the UFC’s ability to control fighters’ careers while considering them “contractors”. Maybe one of these days Jake Paul will actually come around and save the day.