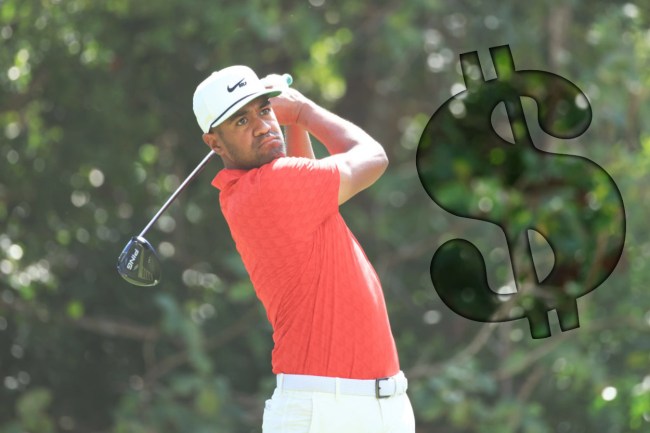 Tony Finau has earned a little north of $25 million on the PGA Tour. That’s a pretty decent chunk of change, but it’s about 60 times less than what his caddie’s net worth is.

Finau’s full-time caddie, Mark Urbanek, wasn’t able to make it to this week’s Hero World Challenge in the Bahamas with his wife expecting a child. So, Finau called up one of his friends, Ryan Smith, to carry the bag this week.

Smith just so happens to be worth $1.5 billion and not too long ago bought the Utah Jazz. I’m just going to go ahead and say that this has to be the first time in the history of golf that an NBA owner is playing the role of caddie on the PGA Tour.

Dan Rapaport of Golf Digest was the first to get the scoop about Smith grabbing the bag for Finau this week. The exchange between Finau and Rapaport was absolutely awesome:

“Gonna have a friend caddie for me,” Finau said. “Which friend?”

So nonchalant and casual, which is so on-brand for Finau.

Smith is the co-founder, alongside his brother and father, of the Utah-based cloud computing company Qualtrics. Just a few days before Qualtrics’ scheduled IPO in 2019, SAP decided to scoop the company up for a smooth $8 billion in cash.

Not that Smith needs the money at all, but it’s worth noting that the last-place finisher at this week’s extremely limited field takes home $100,000. It’ll be interesting to see if Finau pays Smith his fair share come Sunday evening.