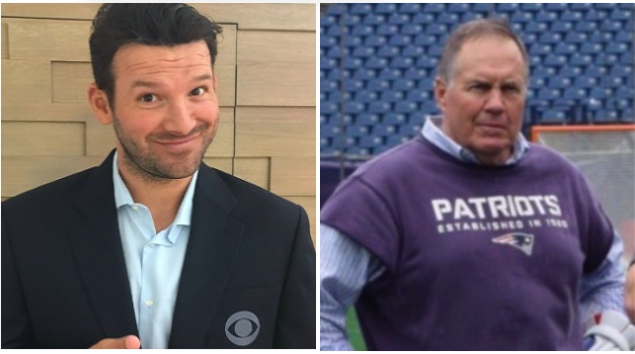 Tony Romo has killed it in the broadcasting booth through the first two games of the NFL season. He’s energetic, insightful, charismatic, and even calling specific touchdowns before they happen.

Romo yet again demonstrated the immense knowledge he’s acquired over his 14-year NFL career by taking us inside the genius mind of Bill Belichick as only a student of the game could.

With five minutes left in the fourth quarter and the Patriots holding a 23-point lead, many coaches would be high fiving his guys and smiling for the camera. As Romo pointed out, Belichick was already trying to fuck up the minds of his future opponents.

With the Saints inside the 10-yard line, Belichick put five defenders on the line and showed blitz, an uncharacteristic move in that down and yardage situation. But, Belichick knew he had the game won, so instead of dropping two guys back in coverage, he sent them at Brees.

Romo said that when Houston studies film on the Patriots next week, they’ll look at the percentage of time the Patriots played man coverage and rushed five defenders, and this move by Bill distorted those numbers.

“[He] just added to that number right there by blitzing five guys and showing the people: Hey, 50% of the time he does this.”

“You never get a beat on what he’s gonna do,” he added.

Check out the play below: