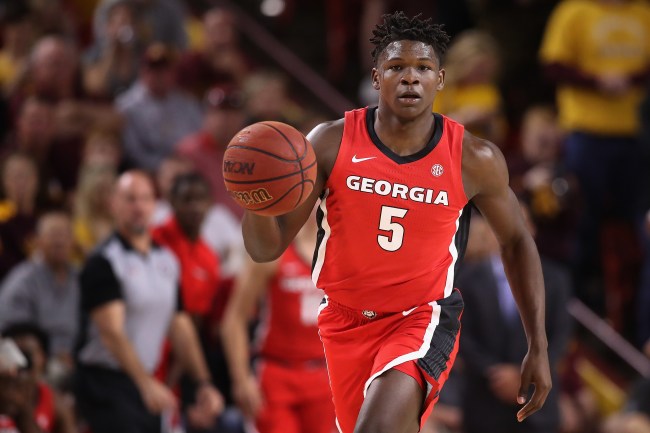 Georgia standout guard Anthony Edwards is a projected top-three draft pick in Wednesday night’s NBA draft, but on Tuesday he made some comments that are alarming fans.

According to an interview with ESPN’s Alex Scarbough Edwards appears disinterested in playing basketball and actually said that he would prefer to be drafted by the NFL because he can have more fun on the field.

To be honest,” he says, “I can’t watch basketball.”

He retells the story about the first time he dunked and how it signaled to him that he was talented and could accomplish something he might not have been able to in football, which was his first love. So that’s the direction he went, simple as that, hanging up his cleats. “That’s all I needed to see,” he says.

So when after that did he get into basketball?

He’s not entirely convincing. He says if he were drafted by the NFL tomorrow, he’d let basketball go. “Because you can do anything on the field,” he explains. “You can spike the ball. You can dance. You can do all type of disrespectful stuff.” In the NBA, he says, “you can’t do any of that. You’ll get fined.”

Not only would Edwards prefer to play in the NFL, but he told ESPN that he’s also an aspiring rapper.

He goes on to say that he’s an aspiring rapper. He’s already recorded a few tracks with his older brother Bubba. So, like Damian Lillard? “But I really can rap,” he says. “Dame, talking about — I don’t know what he’s talking about. I’m rapping like Lil Baby.” He says he won’t release any songs until he’s established in the NBA.

NBA fans weren’t entirely sure what to make of Edwards’ comments right before the draft.

Anthony Edwards talking about wanting to play in the NFL so he can celebrate, being an aspiring rapper and calling out Dame for his lack of musical talent. Also says he can't watch basketball.

I mean, that's gotta be up there with some of the worst pre-draft quotes all-time. pic.twitter.com/dy73pdJ2F0

– this what you don’t say 1 day before the draft LMFAO https://t.co/rLPFtn6Hj3

Call it an overreaction if you want but I'm passing on him because of this. I love the game of basketball & your best players should love the game even more https://t.co/6Ewmp0eYl1

Do not, I repeat, do not invest in Anthony Edwards 🗣 https://t.co/MEy55D7uwE

I know which rookie I’m not drafting this fantasy season…kid’s about to stop playing at half time https://t.co/eYcMisFQ02