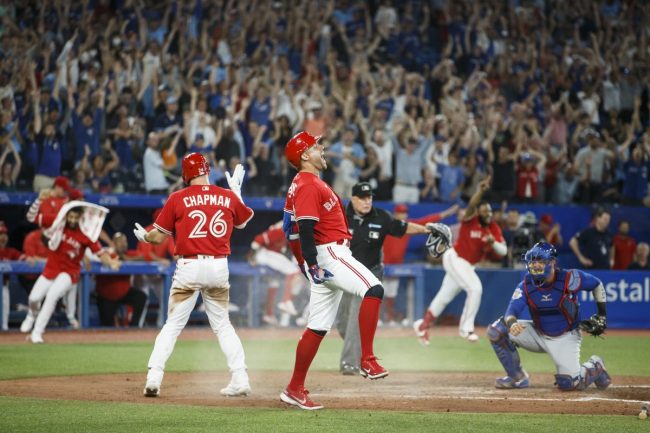 There’s a lot going on these days in the world of the Toronto Blue Jays. Toronto got off to a slow start in the 2022 season, leading to the eventual firing of manager Charlie Montoyo.

Since then, however, things have begun to look up.

The Blue Jays are currently 69-58 (nice) and hold the final Wild Card spot in the American League, two games ahead of the upstart Baltimore Orioles.

Beyond that, Toronto boasts some of the most exciting young talent in baseball. Starting pitcher Alek Manoah made his first MLB All-Star Game this year at the age of 24. Last year’s AL MVP runner-up Vladimir Guerrero Jr. made his second straight All-Star appearance at just 23 years old, and young catching prospect Gabriel Moreno is doing insane things like this.

Apparently, that wasn’t enough to keep the interest of a pair of Blue Jays fans on Monday night.

Toronto began a three-game home stand with the lowly Chicago Cubs on Monday night. Chicago, however, got out to an early 4-0 lead and that was enough to lose the interest of at least a pair of fans in attendance.

Two people were escorted out of the Blue Jays game after getting caught having sex pic.twitter.com/z7CBTxRpQ7

A video shared on Twitter late Monday night allegedly shows a pair of fans being removed from the ball park after getting caught getting it on in the top row of the stands.

Toronto didn’t issue a statement on the incident, but it didn’t take long for Twitter to run with it.

Meat Loaf stepped in right before he reached home a said “stop right there, I want to know right now, before you go any further do you love her, will you love her forever https://t.co/zHwNTsuYKg

I guess they really wanted to round the bases. https://t.co/T7kBIouU3i

How can you not be romantic about baseball https://t.co/69dK1CCpnx

The puns continued to fly.

Didn’t realize we had a double header in Toronto last night. https://t.co/f68nBjGxTY

Tragically, these fans missed what ended up being a thrilling comeback. The Blue Jays scored four runs over the seventh and eight innings to tie the game. Danny Jansen then singled to walk it off in the 11th.