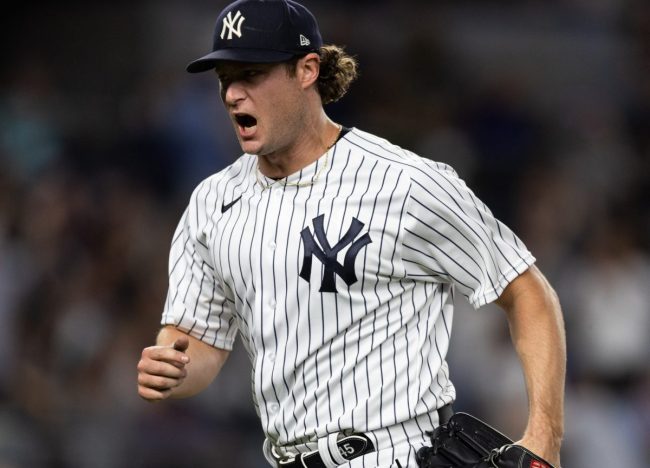 Gerrit Cole was FIRED UP after seeing teammate Aaron Judge plunked by a pitch against AL East rival Toronto. The pitcher flew out of his dugout seat and had to be restrained by the coaching staff.

Cole wasn’t involved in the Yankees’ 4-2 win on Sunday after pitching in the Saturday matchup. That didn’t stop him from making a headline.

With the Yankees batting in the bottom of the fifth inning, Judge was hit by an Alek Manoah fastball in the upper arm. He took exception to the high heat, and with New York having first base open, the slugger insinuated that the plunk was intentional.

Still, he remained relatively calm as he removed the protective gear from his left arm and walked towards first base.

But not everyone had the same cool head. Cole stormed out of the dugout, shouting at the Blue Jays pitcher for what he believed was a purposeful act. He was so wound up that members of the coaching staff had to corral him from walking out to the mound to confront Manoah.

Judge waved for his teammate to sit down, but Cole wasn’t having it.

Aaron Judge had words for Alek Manoah and Gerrit Cole was quick to come out of the dugout pic.twitter.com/KnUDe0gjMh

Cole was fast to react to the hit by pitch, giving the Blue Jays’ pitcher a piece of his mind. In one light, many loved the response from Cole as he was protecting his teammate, and the best player on the club.

I don’t blame Cole for doing what he did, he’s just defending his teammate and the best player on the team throughout the entire year. Last thing he wants is to lose that player. But I don’t think that was intentional at all. Y would he do that.

Most, however, believe that Cole was being a bit dramatic.

What a loser Cole is. Lol.

Maybe he was upset about the loss he suffered to the Blue Jays the day before. He also might’ve forgotten that he, too, hit a batter in that defeat.

This don't look good on Cole who just got mashed by the same team. I understand if it was literally anyone else. Anyone else at all. This looks petty and salty from your 3rd starter.

We had cole crying yesterday, buddy’s still in his feelings pic.twitter.com/J2WUitHbZd

cole forgot he hit someone yesterday too

There are certainly some frustrations in the Yankees’ dugout as they continue to struggle in the second half of the season. Maybe today’s 4-2 win was the first step in turning things around.