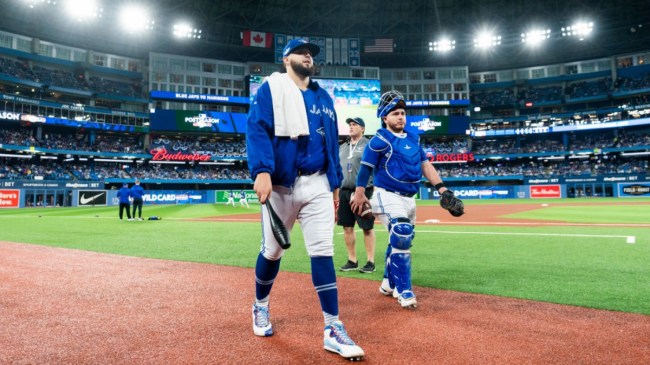 It looks like there could be a new rivalry brewing in the AL East. For years fans have focused on the New York Yankees and Boston Red Sox as the premier matchup in the division, but in recent seasons that rivalry has seemed to cool off while another team has started to get under the skin of the Yankees.

The Toronto Blue Jays have been on the rise the past few seasons and even managed to work their way into the playoffs this season.

Along the way to that playoff appearance their ace, Alex Manoah, ruffled some feathers in the Bronx. Back in April, he got into a heated exchange with Luis Severino during a game.

Luis Severino and Alek Manoah also had an exchange on April 14 pic.twitter.com/hBDgn8duVc

That incident was followed by one that saw Gerrit Cole take issue with Manoah after he hit Aaron Judge with a pitch during an August matchup.

Aaron Judge had words for Alek Manoah and Gerrit Cole was quick to come out of the dugout pic.twitter.com/KnUDe0gjMh

Now Manoah has gone ahead and really given the Yankees a reason to be particularly fired up the next time the two teams meet up.

During an episode of “How Hungry Are You?” Serge Ibaka asked Manoah who the biggest cheater in MLB history is. He claimed it was Gerrit Cole and told Ibaka, “He used a lot of sticky stuff to make his pitches better, and he kind of got called out on it.”

Unfortunately for Cole, he hasn’t been able to use that sticky stuff since the MLB cracked down last season and his performance has clearly suffered. Cole posted his highest ERA since 2017 during the 2022 season.

Whether or not there’s any validity to Manoah’s comments, the New York Yankees will definitely have their first series against the Toronto Blue Jays in April circled on their calendars.